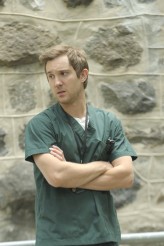 The BEING HUMAN episode “All Out of Blood” deals, per its title, with vampire Aidan (Sam Witwer) encountering some unplanned dietary problems, but the real strength here are some surprising and intriguing additions to the ghost mythology. On the downside, it’s becoming a matter of some suspense just how much more whining and sulking and sins of omission we can take in the relationship between werewolves Josh (Sam Huntington) and Nora (Kristen Hagen).

Aidan is enjoying his new romantic relationship with human girlfriend Julia (Natalie Brown) and even brings her home. Alas, the next morning, it turns out that Julia is none other that Josh’s ex-fiancée, the one he dumped without explanation when he found out he was a werewolf. The situation is made worse because Julia is a newly-hired doctor at the hospital where Aidan, Josh and Nora all work.

Making Aidan’s life even more miserable is the fact that the hospital has twigged to the fact that somebody has been stealing from the blood supply. Now the blood bags are under lock and key. With no other safe food source, Aidan reluctantly winds up visiting a woman he hasn’t seen in awhile – she allows vampires to feed off of her for money. Aidan feeds and gets the rush that, he’s said, will lead to addiction and full-blown vampiric behavior, i.e., killing.

At the hospital, ghost Sally (Meaghan Rath) discovers that Zoe (Susanna Fournier), the young nurse in charge of the newborns, has the ability to see the no-longer living. Because of this gift, Zoe is able to pair old (or at least older) souls with the new babies, resulting in reincarnation. Sally fears the dark entity that came to her in a nightmare and now seems to be stalking her. She wants Zoe to put her soul in one of the newborns, but Zoe says it’s not that simple. First, the older soul and the baby’s own spirit must be compatible, and second, not just any souls should go into infants.

When Zoe hears that Sally has roommates, she wants to interview them. Aidan and Josh, cued by Sally to say they’re otherwise human fellows who happen to see ghosts, go along. Sally isn’t allowed to stay for the discussion. Zoe later tells Sally her roommates talked about her glowingly, but what they said about Sally’s death and her almost killing her fiancé/murderer disqualify Sally from reincarnation. When Sally explains she wants to hide from the dark entity, Zoe points out sensibly that the entity is likely to find Sally no matter what, and if she’s reincarnated, she’ll then be facing the entity as a helpless infant. Sally nevertheless tries to bond with a baby, but when the entity appears, she stops. When Zoe understands that Sally ultimately put the baby’s well-being above her own need to hide, Zoe offers to help Sally fight the entity in another way.

It’s been a month since the last full moon. Josh has rented two huge storage lockers for himself and Nora, but Nora wants to transform with Josh. Josh doesn’t want to do this, for fear he and Nora may injure each other in wolf form. After their awkward meeting after Julia has spent the night at the house with Aidan, Nora encounters Josh’s ex at the hospital where they all work. Julia warns Nora that Josh is selfish and cruel – evidenced by him leaving without explanation. Nora takes a different message away from this, which is that Josh cared enough about Julia to save her from himself, but carelessly “cursed” Nora. Nora also tells Josh that she does remember killing when she turned. Fueled by anger and her rising wolf, Nora stalks Julia, but realizes what she’s doing and finally lets Sally lock her (and Josh) up in the storage units.

The plotline with the most potential and excitement here is Sally, Zoe and the dark entity. The idea of souls lining up in a hospital corridor, hoping to be chosen to be reincarnated, seems original to the U.S. edition of BEING HUMAN – not only has it not been used in the British version, but it hasn’t (to this reviewer’s knowledge) turned up anywhere at all before. Furthermore, it’s a resonant mythological idea. Fournier makes Zoe a pleasingly strong, cranky individual and we want to see where she and Sally go with their foray into spirit-busting.

Aidan and his blood addiction frankly increases eagerness for the season return of TRUE BLOOD, the one show that doesn’t have a moping heroic vampire hero constantly struggling with this issue (okay, Bill Compton is a little mopey, but by the standards of Nick Knight, Angel and until recently Stefan Salvatore, he’s very well-adjusted). However, having the jaded middle-aged blood prostitute is a nice touch.

Finally, Josh and Nora. Where to begin. Well, first, Josh could have told Nora that she killed not a man but a vampire who was about to kill Josh. This would apparently make too much sense. This episode contains several too many episodes of hysteria, half-truths and general unpleasantness between Josh and Nora. We haven’t been given enough material of the two of them as a loving, entertaining couple to make us want them to overcome their relationship problems – their dynamic is actively annoying. It would be all right if there was something new to watch here, but we know Nora is angry about being a werewolf, we know Josh is guilty about it, and the way they go on about it doesn’t rouse our compassion or even our interest.

So to recap – eagerly anticipating the advancement of the Sally/Zoe thread, waiting for Aidan’s blood issues to take us to a larger storyline and hoping that Josh and Nora find a more telegenic way of coping with their lycanthropy.

Click on Link: TV Review – BEING HUMAN – Season 2 premiere – “(I Loathe You) for Sentimental Reasons”

Click on Link: TV Review – BEING HUMAN – Season 2 premiere – “Do You Really Want To Hurt Me”

Click on Link: TV Review – BEING HUMAN – Season 2 premiere – “Turn This Mother Out”

Click on Link: Exclusive Interview with BEING HUMAN star Sam Witwer with the scoop on Season 2

Click on Link: Review of the BEING HUMAN – Season 1 finale – “A Funny Thing Happened On the Way to Me Killing You”

Click on Link: AX’s exclusive interview with BEING HUMAN’s executive producers Jeremy Carver and Anna Fricke on Season 1 of the series