TV Review: BEING HUMAN – Season 1 – “A Funny Thing Happened on the Way to Me Killing You” – Season Finale

TV Review: BEING HUMAN – Season 1 – “A Funny Thing Happened on the Way to Me Killing You” – Season Finale 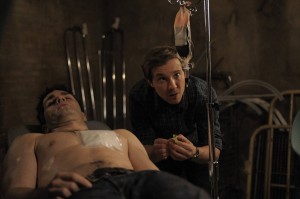 BEING HUMAN ends its first season on a note of suitable completion, if not genius. It flips around who gets to be the hero of the piece from its British forerunner to somewhat tamer effect, but still generates enough good will for the main characters to keep us invested in their challenges, both separate and shared.

After the previous episode culminated in vampire leader Bishop (Mark Pellegrino) staking (but failing to kill) his one-time protégé Aidan (Sam Witwer), werewolf Josh (Sam Huntington) and ghost Sally (Meaghan Rath) get their buddy to the hospital. Josh coaxes his pregnant doctor girlfriend Nora (Kristen Hager) to hook Aidan up to an i.v. blood bag without officially admitting him to the hospital and without explaining Aidan’s special needs. Josh further exasperates Nora by not explaining his own secrets to her, leading Nora to conclude that she cannot rely on the father of her unborn child.

Sally, who had been about to go through her special door to the afterlife, returns home to find the door has vanished. However, she finds that she is now powerful enough to move objects around by picking them up, just like a corporeal living person can do. Bishop shows up at the hospital and threatens Josh in order to get a message to Aidan.

Bishop wants to fight Aidan to the death once and for all, now that Aidan has foiled Bishop’s plans to defy the powerful cadre of elder vampires led by Hegemon (Terry Kinney). Aidan is weak from blood loss, but his old human love Celine offers to let him drain her – she says she’d rather die for him than for cancer. Aidan refuses at first, but when Celine explains that Bishop kidnapped and evidently violated her many years ago (preventing her from having a life with Aidan), Aidan does as Celine requests.

Meanwhile, Josh and Sally come up with a plan whereby they will trick Bishop into being locked in the basement with Josh as the full moon rises. The trick turns out to be on Josh – Sally locks him in the basement and goes to help Aidan. Josh has left a cryptic note for Nora, who finds him in the basement mid-transformation. Josh gets her out the door, but scratches her in the process.

Aidan and Bishop do battle. Sally distracts Bishop for a moment, which is what it takes for Aidan to decapitate Bishop. Josh talks to Nora in the morning – now that she knows his secret, they can be together. She doesn’t tell him that he’s scratched her. Back at the house, Aidan, Josh and Sally relax together – until Hegemon shows up at the door to thank Aidan and tell the younger vampire that he’s now in charge of the Boston bloodsuckers.

The fight between Aidan and Bishop has been edited rather oddly, with freeze frames punctuating the action. It makes the sequence different, but not more exciting or revealing. This is a shame, because the combat choreography is otherwise done very well. For that matter, it’s too bad to lose Pellegrino’s nuanced, charming menace, but he certainly makes an impression while he’s on screen and we can hope that Season Two will give us a villain of equal weight.

In the British episode, the werewolf character did square off against the vampire antagonist. On the one hand, changing this dynamic certainly gives Aidan closure in this aspect of his existence; on the other, it shortchanges Josh and Sally to an extent.

The friendly chemistry between Josh and Sally as they start out on their Aidan-saving mission is good, though the flashbacks to the origins of all the relationships aren’t as revealing as they might be. The push-pull between nervous Josh and baffled Nora has gone on to the point where her knowing the big secret is not just a relief, it’s an imperative – we’re grateful that she handles it so well.

“A Funny Thing Happened on the Way to Me Killing You” is respectable and interesting enough to bring us back next year, even if it’s not as fully compelling as it might have been.

AGREE? DISAGREE? Let us know what you think – leave your comment below