DANCING WITH THE STARS Recap: Sugar Ray knocked out of the Season 12 competition 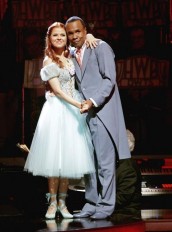 DANCING WITH THE STARS Recap: Sugar Ray knocked out of the Season 12 competition

It was down to Kendra and Sugar Ray, but the K.O. went to the Champ

The Champ is down for good. Sugar Ray Leonard is knocked out of DANCING WITH THE STARS in week four. In a somewhat surprising ending, Leonard was ousted while lowest ranking celeb Kendra Wilkinson was saved, to her surprise and everyone else’s. Still, it was destined to be either Leonard or Wilkinson and somehow Wilkinson’s GIRLS NEXT DOOR fans pulled her through to week five.

The rest of the show was standard. More exciting was the fact that pro dancer Karina Smirnoff’s Playboy pictorial is arriving on newstands this week, leaving many to wonder whether she is hurting partner Ralph Macchio’s chances at the silver, glittery first place orb. After all, ABC is a family network, right? Well, I am not sure about that. Many of the costumes worn are little more than bathing suits with sparkles and some dance numbers, usually the best-scored ones, are very erotic. So is the show a family show? Well, yes and no. It all depends. Either way we are talking about apples and oranges. And let’s face it, if Macchio gets the scores and receives the votes he will win regardless of what his partner does on her own downtime.

However, leaving first time front runner Chelsea Kane in a “will I or won’t I make it through” panic until the end of the show was a bit cruel. C’mon! How they pick who they will deceive into believing they had the lowest scores of the night I have no idea, but there was Wilkinson, Leonard and Kane as the last three remaining, Kane with the highest score and the other two with the lowest scores. One can only assume it was done for “extra” suspenseful purposes.

In between the dramatic pauses and deception, Jennifer Hudson performed twice with the 46-piece orchestra and we got to see the now inevitable DWTS Troupe perform. Video segments aside, none worth mentioning, the show was typical fare for a Tuesday night DWTS Results Show. With few “weak” links left, the show is tight, tight, tight and if Wilkinson’s fan base proves to be larger than life, ie. Bristol Palin, some good dancers might not see the light of day for week six. But first, onto week five with the remaining eight. More than half of which could walk away a season 12 champ!