It’s a new decade, new rules as the successful horror franchise is rebooted and refurbished 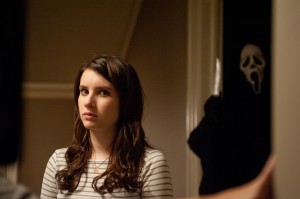 Most filmmakers are lucky to have one major franchise to their name in their career, but Wes Craven has managed to have two with A NIGHTMARE ON ELM STREET and the SCREAM movies to his name. Throw in THE HILLS HAVE EYES and LAST HOUSE ON THE LEFT (which have both been remade from his seminal 1970s films) and the director has proven to be one of horror’s continual masters and a force to be reckoned with.

With SCRE4M (aka SCREAM 4), Craven returns for the fourth go-around to the venerable horror franchise that started in 1996 and has chronicled the exploits of heroine Sidney Prescott (Neve Campbell) who has survived the elusive Ghost Face killer film after film.

Also along for the ride has been officer Dewey (David Arquette) who is now a Sheriff in the new film and his on again/off again love interest newscaster Gale Weathers (Courteney Cox) who he is married to in SCRE4M.

As for  Sidney, in the new film she has reclaimed her life and even written a memoir which she is promoting in her hometown of Woodsboro where the original murders took place. However, Ghost Face has returned to cause more mayhem (and create a whole new body count).

Craven takes Five to talk about SCRE4M which arrives in theaters this Friday.

On creating rules and breaking rules within the SCREAM universe …

“I think the very essence of the SCREAM films is we break the rules,” says Craven. “We state what the rules are and immediately break them. Just like in SCREAM 1, if you say ‘I’ll be right back,’ you’ll die. If you have sex, you die. Neve has the first sexual encounter of her life [in SCREAM 1] and she’s one of the survivors. The rules are really cliches and as soon as they’re stated in the SCREAM films we break them. If they think they know what the rules are, we immediate say ‘no, you don’t.’”

On how the internet has changed and how it affected the film …
“Once you think about the possibilities of using them, you also think of abusing them in a movie,” says Craven. “If you’re in a theater today, people are texting all around you. It’s one example of how annoying it can be.”

On keeping the movie’s details secrets from a ravenous public …

“Keeping the thing a secret was like spywork even when we did our original casting where we read hundreds of young actors,” says Craven who also had a clever way of not letting them see pages of SCRE4M. “We had them read pages from SCREAM 1. I don’t think we read actors from actual pages of script. A lot of these things were annoying, but necessary to keep things secret.”

“We had contests where we gave away posters of the film – contests where people could identify weird bugs we took photos of on set,” says Craven. “We kept fans aware we were filming and that we’re out there. It was intriguing to see how quickly people answered. My co-producer Carly Feingold got it rolling for me. People were asking within fifteen seconds from Germany. It made me aware that even the process of filming was different [from working on the first movie]. It’s much quicker and worldwide.” 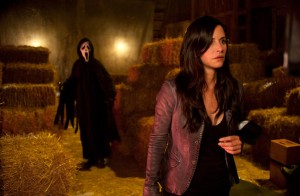 On the long wait in between this new sequel …

“Bob Weinstein is the Godfather of SCREAM and he felt after SCREAM 3 that there wouldn’t be any more films for a long time,” says Craven. “He didn’t want it to kind of feel they were knocking them out to make money. Then, at the end of this last decade, with the presence of the electronic media and everyone online it felt time to take that into account. Cinema was changing. You’re not just watching movies [in theaters], you’re watching them on your computer or phone. The whole business as you know it is changing dramatically especially how fans participate and try to emulate those movies. So this is the perfect time to make a new SCREAM movie.”