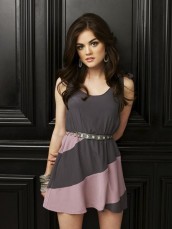 The actress talks about her character on the ABC Family series, the show's impact and working on an iconic film series

Sara Shepard’s young adult book series PRETTY LITTLE LIARS, about a quartet of high-school best friends enmeshed in some extremely heavy secrets, has been turned into a huge hit of a television series on ABC Family Channel which continues the second half of Season 1 tonight.

Lucy Hale (a veteran of the 2007 remake of THE BIONIC WOMAN, in which she portrayed Jaime Sommers’ younger sister), is one of LIARS’ four leads, plays Aria Montgomery, a character whose unorthodox ways extend to having a romance with one of her high school teachers.

Hale talks about the show’s impact, her character – and on working for Wes Craven on SCREAM 4 in this exclusive interview.

ASSIGNMENT X: The PRETTY LITTLE LIARS television series has become not only a hit, but a bit of a cultural phenomenon. Were you hoping for/expecting this when you started working on it?

LUCY HALE: I think we all hoped and strived for that and I think we knew there was going to be a lot of excitement and speculation about the show, because it was a big book series, but I don’t think we ever expected quite this. It’s a whole new world and we’re just enjoying the ride. It’s very fun and the response, for the most part, has been very positive, and the people who watch the show are just crazy about it and it’s awesome. 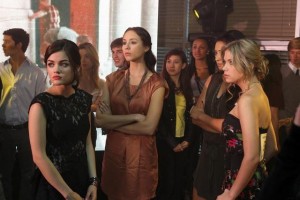 AX: The series is made by and airs on ABC Family, which would seem to suggest lighter fare, but it has a lot of adult themes. Were you expecting that when you signed on?

HALE: That was one of the things that made me want to sign on, because [before reading the script] I was like, “I don’t just want to do a show that’s just going to appear and not really make an impact.” I feel that this show is unlike any other teen show out there and I feel like that’s why people are tuning in each week. It’s because it’s different from everything out there and we’re really pushing the limit.

AX: Do you think one of the things that gives PRETTY LITTLE LIARS that adult quality and also maybe makes it different is that it deals with teen characters who are making decisions that are uncommonly critical?

AX: Is there anything in your own experience you bring to bear in playing Aria?

HALE: That’s where it gets a little difficult, because the only thing I’ve related to in Aria’s life is the divorce between her parents. That’s the only thing I can relate to mirroring my life and her life. But everything else, you sort of have to put yourself in the most similar place possible, because obviously, I’ve never had a [romantic] relationship with my teacher and I’ve never, thank God, experience the death of a best friend and I’ve never been stalked by anyone. So you just have to imagine what it’s like to fill these girls’ shoes, because that’s definitely the hardest part, going through these situations that the girls are going through.

AX: Speaking of the shoes, it sounds like you and the other three leads are all costumed outside your real-life comfort zones.

HALE: Right. Aria’s very different and quirky. She’s a little bit more out there than I am. I’m definitely more girly and I like to get dressed up and I like Aria because she does whatever she wants. She doesn’t care what other people think and I think that’s great for girls to see – that she’s not out there trying to impress anyone, she’s just being herself and that’s really cool.

AX: Does dressing differently that you dress in normal life help you get into character?

HALE: Oh, absolutely, because I feel like what you wear depicts who you are, how you’re feeling that day – what you’re wearing depends on how you feel that day, and it definitely helps with the situation.

AX: Do you have some sort of connection to the TWILIGHT film series? 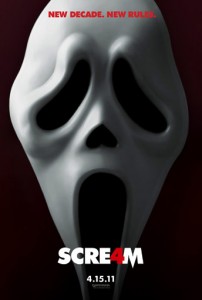 HALE: I auditioned for TWILIGHT and now I’m going to be in SCREAM 4.

AX: Were you a fan of the earlier SCREAM films?

HALE: I was. I feel like everyone’s seen those movies, everyone’s a fan and they’re a big part of my generation, because those were the only horror movies we had growing up, pretty much. So to be a part of the reboot, if you want to [call it that], is very exciting, because they’re coming back with a bang. Wes Craven is directing.

AX: How is Wes Craven to work with?

HALE: You know, I didn’t know what to expect, but he is such a doll, so soft-spoken, very easy to work with, and he knows how to get what he wants. He knows how to talk to actors, so it was one of the best experiences I’ve ever had.

AX: How was the pace of production compared to working on PRETTY LITTLE LIARS?

HALE: TV is, you don’t get to breathe. It’s “hurry up and go, go, go.” Movies are, “hurry up and wait.” You do probably two scenes a day, a scene a day. We shot one scene [in SCREAM] probably over twelve hours, whereas in TV world, we’ve shot six to eight scenes in that amount of time.

HALE: No – it’s not really a [matter of] preference of which do I like more. I mean, obviously, in the long run, I’m very lucky and fortunate to have the job that I have and I hope to see it go for many seasons, but when I get older, I’d love to do films, so whatever they’ll hire me for, I’ll do.