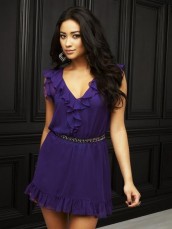 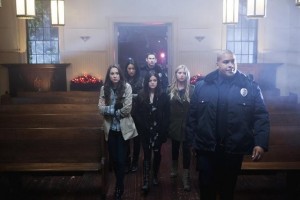 ABC Family’s freshman series PRETTY LITTLE LIARS, based on Sara Shepard’s novels about four high school friends sharing a variety of dangerous secrets, has been a breakout hit this season. With the season finale tonight, we talk with Shay Mitchell, who plays Emily Fields, about the show and her character.

ASSIGNMENT X: PRETTY LITTLE LIARS has gone beyond being a hit TV show and actually turned into sort of a cult phenomenon. When you first were cast as Emily, did you ever think it was going to turn into something this big?

SHAY MITCHELL: From reading the breakdown and [knowing that] Sara Shepard had such a successful book series [that] the show was based on, I had some kind of hopes for it, but I didn’t know that it was going to be picked up internationally, in the Philippines and in Australia. And then to have the ratings come in like they were, which were phenomenal. No, I didn’t expect it to be this big, but I did know that Sara Shepard had something really good with the book series.

AX: How has your character changed over the season? In what you can say – we know you can’t give out season finale spoilers.

MITCHELL: She’s definitely become a lot more comfortable with herself, and she’s figuring out her sexuality, but I think her coming out to her father was a huge step forward for her and a big weight that was lifted, so I think she’s just evolving and growing and discovering who she is.

AX: Did you know going in that Emily was going to come out as being a lesbian?

AX: What sort of response do you get from fans of Emily’s character?

MITCHELL: I’ve been getting asked a lot of advice [because of] playing this character from a lot of young teens, and I would just continue to tell them to be true to yourself and to be honest and try and live the most authentic life that you can, which is what Emily is doing. 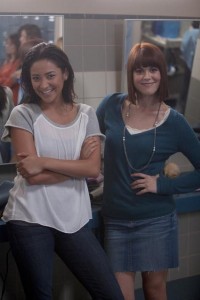 AX: Our readers can’t see you, obviously, but you are wearing some very high heels. Emily likes tennis shoes – you’ve said in real life you’re not much of a tennis shoes kind of person. Are you somewhere between the tennis shoes and the heels that you’re in now?

MITCHELL: Even when I go out, like in my winter boots, they all tend to have a slight heel on them. So unless I’m at the gym – I don’t know why. I like being tall and I embrace it and so with heels, I’m like, “Yay!” I’m used to it, because I used to be a hostess at restaurants, so I’d wear heels for like eight, nine, ten hours.

AX: How do you feel the dynamic between the four lead characters has changed over the first season? And are you changing how you’re playing Emily at all in response to that?

MITCHELL: I think we’re all getting a lot closer than we were even at the beginning, because we had just met each other, or at least I had [just met] with the rest of the girls. Even in the show, the girls were separated for about a year since the disappearance of Alison, and then they’re brought back together and now they’re closer than ever, which kind of explains our relationship, too, as cast members, so it’s really, really neat.

AX: Is there anybody in your life who’s vanished off the map and you’re thinking, “I wonder if it’s like the way Alison disappeared in the show?”

MITCHELL: No! I’m still close with everybody that I went to school with, or at least my close-knit friends, I’m still very, very good friends with them, so that hasn’t happened. That would be interesting.

AX: Do you have an idea of where you’d like to see your career go from here?

MITCHELL: [When] we’re all on set, we kind of live there, so we’re all very focused on this show. I am the new spokesperson for Pantene, which is so amazing, and I’m really excited about that. I’d just like to continue doing what I love, which is acting, and if that’s in plays or on TV, this show or in movies, then I’ll be happy. As long as I’m performing, and that’s what I love to do, and it’s great. That’s all I can ask for.