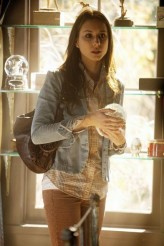 The actress talks about handling pressure, as her character and in real life 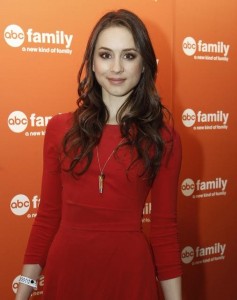 On ABC Family’s hit PRETTY LITTLE LIARS, which has its first-season finale Monday night, Troian Bellisario plays Spencer Hastings, one of a group of four high-school friends keeping secrets. Spencer is the perfectionist of the quartet, who is under a lot of stress from both outside forces and her own personal drives.

Although Bellisario has had a recurring role on NCIS as the sister of the character Tim McGee, played by her real-life stepbrother Sean Murray, and her parents are television industry veterans – her father is producer Donald Bellisario (NCIS, JAG, QUANTUM LEAP) and her mother is actress/producer Deborah Pratt – she says she didn’t expect to become a regular on a TV series, let alone one as popular as PRETTY LITTLE LIARS.

TROIAN BELLISARIO: I never imagined being on a hit show. I never thought I’d do television in my life [laughs], so it’s a totally different life that I’m living right now than I ever thought.

ASSIGNMENT X: PRETTY LITTLE LIARS deals with a lot of real-life coming-of-age subject matter. Are you seeing any parallels to anything you did in your own life, “Boy, I’m glad I handled that differently,” or “Oh, no, I did that, too”?

BELLISARIO: It’s less “Boy, I’m glad I handled that differently” and more, “Wow, I totally remember what this was like and thank God I’m mature and independent enough to handle this now,” but I definitely experienced a lot of life like Spencer, under a lot of pressure from school. I wanted to be the best at everything, without really taking the time to understand what I needed as a person and I went through a lot of self-sacrificing and a lot of unhappiness, as it does for Spencer. If anything, my life has given me a lot of love for people like Spencer and for girls like I was, who really are struggling because they feel like nobody will give them the time of day or love them unless they’re perfect, and that just takes time and it feels like somebody on the outside to come to you and say, “What do you like? What do you want to do? Because I’ll love you no matter what.” And eventually, when I got that in my life, from the right people, I could let go. 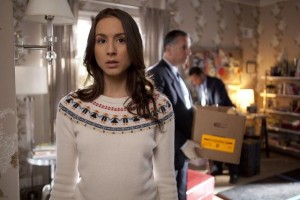 AX: Do you feel we learn as we grow the way the characters are learning on the show?

BELLISARIO: All of the biggest letdowns or tragedies in my life – the moments that I feel like I’ve hit rock bottom and I think, “Why did this happen, how will I ever recover from this?” – a year or two down the line, I can draw a direct line back to what happened and how that made me a better person and how that made my life so much more wonderful and rich. So I definitely think everything happens for a reason.

AX: A lot of PRETTY LITTLE LIARS fans look to the cast for advice on social issues. You and your cast mates have spoken up about bullying …

BELLISARIO: To me, the biggest thing in dealing with bullies is, get support, tell [someone]. Go to your parents and not necessarily to tell on the bully or to have your parents go in and change the situation for you, but just so that people know what’s going on, so that you don’t feel alone. The most important thing to do is really sit down with yourself and look at the person who’s doing what they’re doing, and try to find sympathy for them, because it’s coming from a wounded place. They wouldn’t be doing that if they were a happy, well-adjusted person with a really wonderful life, like they’re trying to make you believe. If you can look at that person and find out what they’re struggling with, and find a little bit of love for them, it’s easier to let go of what they’re trying to do to you. 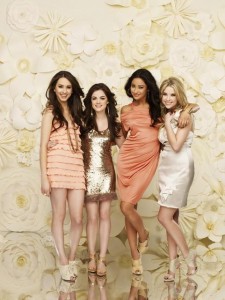 AX: On screen and in interviews, you seem very graceful and poised. Is that how you see yourself?

BELLISARIO: [laughs] I’m the clumsiest human being – walk into walls, spill things all over myself. Going on a date with me is like going to a clown show. You’re just going to have a great time.

AX: Do you and your fellow LIARS actresses – Shay Mitchell, Lucy Hale, Ashley Benson – hang out together when you’re not working?

BELLISARIO: We try to. It’s really hard, especially because we’re together pretty much sun-up to sundown, Monday through Friday, and so weekends, we’re generally trying to see our families or see our loved ones, see our friends that we can’t see all the time. But we’re always in contact with each other and we’re never more than a phone call away.