Exclusive Interview: BEING HUMAN takes a bite out of Sam Witwer and Mark Pellegrino 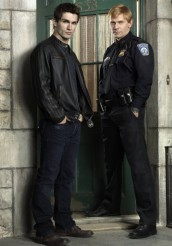 Exclusive Interview: BEING HUMAN takes a bite out of Sam Witwer and Mark Pellegrino

On BEING HUMAN, a vampire, a werewolf and a ghost share a house and their mutual yet disparate attempts to achieve something like the title condition. The actors playing the series’ two principal vampires, Sam Witwer as roommate Aidan and Mark Pellegrino as police lieutenant (and Aidan’s sire) Bishop, likewise share a few things, like a background in cult hits.

Pellegrino was the quasi-saintly Jacob (Pellegrino jokingly refers to him as “diet Jesus”) on LOST, the Earthly incarnation of Lucifer on SUPERNATURAL, Rita’s violent ex-husband on DEXTER; Witwer also appeared on DEXTER, as well as being Davis Bloome, aka Doomsday, on SMALLVILLE, Crashdown on BATTLESTAR GALACTICA and the voice of Starkiller on the videogame STAR WARS: THE FORCE UNLEASHED.

As the two men are interviewed together, they sometimes pose questions to one another. 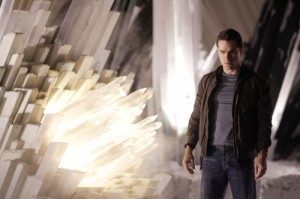 ASSIGNMENT X: Do you actively like playing genre characters, or is this just what has come up for you?

SAM WITWER: What do you think, do you like it?

WITWER: I’m a big, big fan. In terms of the vampire thing, I’m kind of new to that, but everything else I’m really into.

AX: Do you feel that the duality of Aidan’s character, wanting to be helpful to people but fighting his own bloodlust, is somewhat similar to Davis/Doomsday?

WITWER: [laughs] Well, yes and no. There’s a similarity there, obviously, because there are two men who are dealing with being monsters and they don’t want to be, but Aidan gets to lighten up here and there and there gets to be some levity and some humor and some comedy, so that’s a pretty big change. There wasn’t any room for comedy in SMALLVILLE with that character.

AX: And would you say Bishop closer to Lucifer or closer to Jacob?

PELLEGRINO: That’s an interesting question, because I think there are aspects of both in him. I think all of those characters that you talked about have morally ambiguous, interesting qualities, and Bishop fits into that.

AX: Was one of the conditions of you taking the role of Bishop that somebody else did not take over the character towards the end?

AX: On LOST, Jacob gave his job away and on SUPERNATURAL, the character jumped into somebody else’s body.

PELLEGRINO: Lucifer is known from jumping from body to body and generally decimating people, but thank God vampires don’t do that. They’re stuck with their natures until the bitter end.

WITWER: What’s fun is that Mark and I both get to play different versions of our characters, depending on the era that we’re in, so you get to see us in different time periods, and the attitudes, the opinions and even the demeanor of the character change greatly, depending on what time period you’re in.

AX: Have you had to practice talking with the fangs in your mouths? 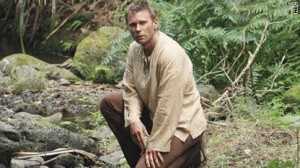 WITWER: You know, I think we haven’t done all the ADR, the dialogue replacement yet, and I’m curious as to what pieces are going to be redone. There’s one scene where I feel like me tripping over the fangs is actually totally appropriate for the scene, and in other ones, I think he needs to speak more clearly. So I don’t know. We don’t know yet. Was it sometimes a little difficult? Sometimes. Did you find it difficult?

PELLEGRINO: Sometimes. Like you, sometimes. But I didn’t have to do a whole lot of talking with fangs in.

AX: On the original British version of BEING HUMAN, we see in the flashbacks that Aidan used to be much more badass than Bishop. Is that true on the U.S. version?

WITWER: Well, it depends on when you’re talking about and depends on what you mean by “badass,” but you do see some juxtaposition of their opinions and their relationships to each other.

PELLEGRINO: Definitely. Things are not always what they seem and the relationships do change when you see them in flashback.

AX: Have you guys gotten to do anything physically on BEING HUMAN that’s very exciting, fun, challenging – hitting, swords, biting?

WITWER: A lot of stuff. We can’t really give away what specifically, because those would give away some really nice surprises, but there are some really cool physically challenges.

AX: Did you read for your roles, or were they offered to you?

WITWER: I think they just walked over and offered it to him. In my case, I had to audition and went through that whole process.

PELLEGRINO: Yeah, they offered it to me, luckily. 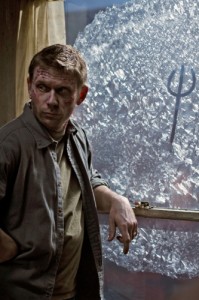 AX: Do you like playing darker characters, or do you think there’s some quality in you that you may not see that casting people see?

WITWER: You know, what’s funny is they told me that one of the decisive things of hiring me is that I need to be able to stand up to you. And they said a lot of actors they didn’t feel could do it. So that’s kind of [flattering].

PELLEGRINO: Vampires need to be strong.

CLICK HERE for BEING HUMAN episode reviews and more interviews