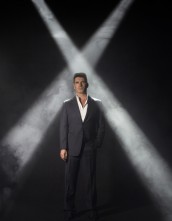 No word on other judges, but the scoop on what he expects from his fall reality show on Fox

Well, today producer and judge Simon Cowell spoke about the new series which will debut in the fall and is an adaptation of a successful format he created in Britain.

“I think we’re going to do something different,” says Cowell. “The stakes are high and I have no idea what it’s going to look like until we start shooting.”

The big news is the winner will receive a recording contract with Sony Records and a whopping $5 million dollar cash prize.

“The reason we decided to do this is to show people who are auditioning for show that sometimes you have to put your money where your mouth is,” says Cowell. “By putting up that kind of prize money, it’s a massive, massive risk. It’s also an incredible incentive. I think it puts everybody rightly under an enormous amount of pressure. I didn’t want to go into this show without feeling a certain amount of pressure. I also did it, because I believe I can find a star. If I’m nervous and confident, it was the right thing to do. And this is not a dressed up 5 million dollars -it’s 5 million dollars paid to the winner over five years.”

Talk about upping the ante.

The show will also feature three judges who will also serve as mentors to the contestants which Cowell feels separates this from other reality competition shows.

“It’s more raw and much more competitive, because the judges have to mentor,” he says. “It’s more personal and at some point in the show the finalists go to the judges home and each judge makes a decision who is going to finals. Other aspects are the live show. You’re going to see a very different live experience than you’ve seen on American TV. It’s one of those things, you have to watch it and you’ll see the difference. I have to put people on this panel who I think can generally be better than me.”

As for who will sit on the judges panel, Cowell says that announcement won’t be announced for a few weeks. That said, he admits he still has a fondness for Paula Abdul.

“I’m a massive fan of Paula,” says Cowell. “It’s quite unusual you work with someone as long as I did with Paula. We were friends 80 percent of the time while on the show. I’m a big fan of hers. I’m not going to say today, on this day, who we are going to confirm and who weren’t going to confirm, but we honestly haven’t made up our mind yet. I expect to make an announcement in three to four weeks as to who the panel will be.”

Ultimately though, it’s about the talent and Cowell is confident they can find a star (or stars) who are worth $5 million and who can take America (and abroad) by storm.

“If we can’t create a global star, we’ve failed,” says Cowell. “There is that person sitting in American right now waiting to be discovered.”

WHAT DOES SIMON COWELL THINK ABOUT THE NEW AMERICAN IDOL? – CLICK HERE to find out!