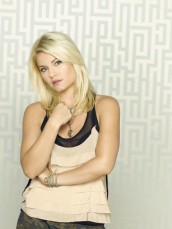 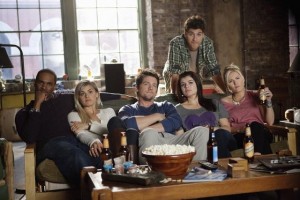 In ABC’s new comedy HAPPY ENDINGS,  premiering tonight at the special time of 9:30 PM, with a second episode in the regular 10 PM timeslot, Alex, played by Elisha Cuthbert, is supposed to marry David, played by Zachary Knighton. However, she ditches him GRADUATE-style at the altar for another guy. While Alex’s new romance doesn’t last, the show explores the lasting ramifications of the breakup on both characters and their group of mutual friends.

Calgary, Canada-born Cuthbert played Jack Bauer’s peril-prone daughter Kim off and on over the ten-year span of 24 and more recently co-starred in the missing-persons drama THE FORGOTTEN. She talks about switching genres and more in this exclusive interview.

ASSIGNMENT X: Coming off of 24 and THE FORGOTTEN, were you hoping to do a comedy?

ELISHA CUTHBERT: I was.

CUTHBERT: Yeah. I’m really interested in tackling all kinds of genres. I’ve never been one to be like, “Oh, I’m only a dramatic actress, that’s all I want to do, it’s the only genre I want to tackle.” I’ve always been interested in trying different things, so I was excited to jump into comedy. I was hoping for it and it came true, which is lovely.

AX: Does your character Alex immediately realize she’s made a giant mistake after the wedding incident?

CUTHBERT: No. I think she’s still confused. I mean, I would be lying if I said that the character knew what she was doing and it was all thought-out. I think when Bo [Travis Van Winkle] comes into the wedding and basically breaks it up, it’s her out. It really has nothing to do with another man, it’s all these questions and complications that she’s going through in life, and even after that, she’s still trying to figure out where she fits in with this group of friends and what her relationship is going to be with the Dave character.

AX: So basically, if a bus had come by the wedding …

CUTHBERT: She probably would have jumped [onto it], absolutely.

CUTHBERT: Bittersweet. I mean, it’s been such a constant thing in the last ten years of my life, I have nothing but fond memories and I love all of them. They’ve seen me from eighteen years old into growing into an adult woman, and they’ve all watched my career kind of blossom, and it’s been a lovely experience. It’s more than just a TV show for me, it’s been a life journey and experience and I’ll never forget it.

AX: Well, you went from playing Kim as a teenager to a married mom … 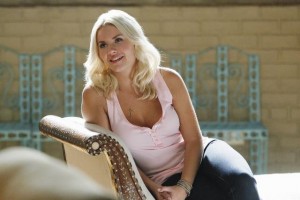 AX: You shot HOUSE OF WAX in Australia. How was that?

CUTHBERT: I didn’t want to leave, to be honest. Something about Australia just makes you want to quit everything you’re doing and just surf every day and live on the beach, but reality kicks in and when the movie was over, I realized I had to come back to reality.

It was really awesome. I don’t keep in touch with all of [the other cast members, who include Chad Michael Murray, Jared Padalecki, Paris Hilton and Brian Van Holt], but when we run into each other, it’s always big hugs and happy to see everybody. We lived together in Australia for four months, so you get a little bit of a bond going, but that was quite the production. I mean, [producer] Joel Silver never ceases to amaze the moviegoers. It was just surreal. It was such a huge production and really amazing to be a part of.

AX: Anything else we should know about HAPPY ENDINGS?

CUTHBERT: I hope people enjoy the show, because I know that we’re having a great time doing it, so I hope to get to do many more episodes.