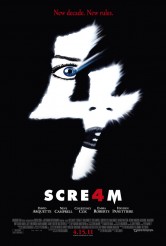 The core ingredients are still on display including the return of Kevin Williamson as screenwriter (he sat out SCREAM 3 and it showed) and returning cast members Neve Campbell, Courteney Cox and David Arquette.

The story returns the action to Woodsboro, CA where the original took place as perennial victim Sidney Prescott arrives in town for a book signing tour on the anniversary of the original murders. She’s come to terms with her past and has written a memoir dealing with her painful self-realization. Of course, murders tend to follow Sidney where she goes and the Ghost Face killer is back in action slicing and dicing a new generation with his large, sharp, glistening blade.

It’s nice to see Deputy Dewey (Arquette) upgraded to Sheriff and he’s now married to former tabloid news reporter Gale Weathers (Cox) whose books have inspired seven STAB films (the films within the film based on the original Woodsboro murders).

To say you would need to see the previous SCREAM films to enjoy SCRE4M would be a misnomer. Unlike SAW and its sequels, if you came in at any point to those flicks, you’d be seriously confused.

With SCRE4M, all you need to know is that murders took place, Sidney survived them and now they’ve started again. There are some nice shout-outs to the previous installments and much awareness of horror movie cliches and tropes (past and present), but this could very well be the first reboot/sequel that actually works on multiple levels even if you’re not familiar with the previous films.

What’s most refreshing is Craven’s knack for suspense and clever fake-outs. As much as filmmaking has changed since 1996, SCRE4M doesn’t go for the faster the better. The pacing and shooting style is old-school in many ways, but still hip and fresh. Nor does Craven go overboard in the gore department. There definitely is blood (and one kill in particular is super-cool), but this is an old-school slasher film where the lead-up to the kill is more important than the kill itself.

Where SCRE4M falters is the latter half of the film which tends to drag a bit before the final reveal of who Ghost Face is and there are few humorous moments which definitely eke into SCARY MOVIE funny territory as opposed to scary funny which SCREAM is best known for. There are also some giant logic leaps that have to be forgiven. For example, the Sheriff can get to an abandoned farmhouse in no time but it takes him forever to get to a house across town? Or what about a hospital where there doesn’t appear to be any working staff? It’s like the HALLOWEEN II hospital (the 1981 version), but with even more severe budget cuts. What’s up with that?

The pay-off at the end is quite good throwing in a strong bit of social commentary that’s a biting indictment of the way we all live life in the media through our social profiles. Any other filmmaker would have tackled this in a heavy-handed way, but Craven deals with this in a very fluid matter making this by far the best and most satisfying SCREAM endings since the original.

Cast-wise, having regulars Campbell, Cox and Arquette back is quite refreshing. They pick up their roles with ease and Campbell is so good, it’s still perplexing why she hasn’t had more success in the intervening years. Please give her more roles. She’s a fine actress and perhaps the best horror movie heroine this side of HALLOWEEN’s Laurie Strode.

The new cast is good too with Emma Roberts playing Sidney’s younger cousin Jill and Hayden Panettiere is fun as her best friend Kirby. It’s COMMUNITY’s Alison Brie though that practically steals the show from the younger cast as Sidney’s publicist Rebecca Walters. She gets some of the best lines in the picture and she manages to be both likable and bitchy all at once – which is a very tricky task.

SCRE4M reminds moviegoers what a real horror movie should be, while also completely deconstructing the genre like the previous installments did. It’s a fun and scary ride that doesn’t take itself too seriously, yet delivers due to having such a master of horror like Craven at the helm.

SCRE4M will make you scream (and scream) again for horror – and unlike the SAW and HOSTEL films, you won’t feel icky about it afterwards.