Home » TV Review: BEING HUMAN – Season 2 – “(I Loathe You) for Sentimental Reasons” 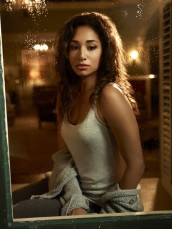 TV Review: BEING HUMAN – Season 2 – “(I Loathe You) for Sentimental Reasons”

Aidan and Suren are sexy, Sally is lovelorn and Josh is ethically confused in an episode with lots of intriguing elements

In “(I Loathe You) for Sentimental Reasons,” BEING HUMAN gets its style on with some hot flashbacks to 1930. The look doesn’t suit everyone, but Sam Witwer as Aidan and Dichen Lachman as vampire princess Suren look smashing. What’s more, the actors and the characters know it and work it to the hilt, achieving some real chemistry. The present-day sequences are less distinctive in appearance, but everybody has something interesting going on in their existence.

It’s not exactly clear where werewolf Josh (Sam Huntington) and his likewise lycanthropic girlfriend Nora (Kristen Hager) are at in their relationship, as Nora doesn’t appear in this episode. However, Josh is approached at the hospital by Brynn (Tracy Spiridakos), who recognizes him as a fellow werewolf. Brynn asks Josh for help in getting her brother Connor (Jon Cor) out of the psych ward, as blood tests will get them all into trouble, to say nothing of what will happen if he’s still there when the full moon rises in a week.

Later, Brynn and Connor invite Josh to hang out with them. Josh learns that the siblings were not turned but rather born werewolves – and very rich werewolves at that. When Connor finds out that Josh is working on a cure, Connor offers to fund the research. Josh is put off, partly because Connor is obnoxious and partly because Josh is, well, Josh. Aidan advises Josh to accept the investment. Josh has another crisis of conscience when he learns that Brynn and Connor want to become wolves all the time, but when Brynn explains that she feels trapped and unhappy in human form, Josh thinks that perhaps helping the siblings would be the right thing to do.

Aidan, meanwhile, is having a miserable time. He can’t get to the hospital’s blood supply and the woman who usually accepts cash for blood won’t oblige because she’s sensibly afraid that her body can’t take it right now. Suren urges Aidan to accept the offer of a mob boss who wants to be turned in exchange for being the vampires’ eyes and ears on the street. Aidan doesn’t trust the guy, but when he almost feeds on a little girl, the vampire caves and tells Suren to accept the offer. Aidan feeds in the process of turning the mob boss, but then feeds too much, killing the man, which is what Suren (who has been urging Aidan to “feed live”) intended all along.

In flashbacks to 1930, we see Aidan and Suren at the same hotel. The two are wildly attracted to each other, but Aidan fears what Mother would say. Aidan’s lieutenant (Kyle Schmid) has no such qualms and beds Suren when Aidan won’t. In the present, Aidan’s bloodlust and desire for Suren merge together and the two vampires begin foreplay while feeding.

Sally (Meaghan Rath), still hoping to be reincarnated, tries to help living psychic loner Zoe (Susanna Fornier) with her love life, steering the woman toward an attractive doctor (Martin Thibaudeau), but Zoe is terrible at flirting. Zoe gets Sally to attend a ghost version of AA, where the spirits talk about overcoming their desire to possess the living. One of the regulars is Sally’s former ghostly boyfriend Nick (Pat Kiely), who kept dwelling on his death. He asks Sally to go to a restaurant with him, which Sally interprets as a date – until Zoe says that she and Nick have been dating. Nick wanted to take Sally out to thank her for leading him to Zoe, who has helped him stop re-experiencing his demise. Devastated by what she perceives as rejection, Sally sees the cute doctor with a girlfriend (Amber Goldfarb) and jumps into the living woman’s body.

All of this has a lot of potential. Josh in over his head with other werewolves may or may not be a variation of his situation last season, but the whole arena of playing with a cure that could go in either direction seems very promising in storytelling terms.

Sally now seems to be in some sort of multi-sided romantic equation – there’s Sally herself, the woman whose body she’s hijacking, the doctor and possibly still Zoe and Nick. Our ghost is obviously floating out of the realm of the friendly into the danger zone, but again, the forthcoming tangle is full of possibilities.

As for Aidan falling off the wagon, we want to know if he’ll get back on, and if he doesn’t, whether he’ll manage to hold onto his sense of self or just let his need for survival take over. In any case, the sparks between him and Lachman, who is uncommonly persuasive as an otherworldly entity with human desires, make for compelling viewing.