Everybody gets deeper into their own problems, with Nora having the most intriguing developments 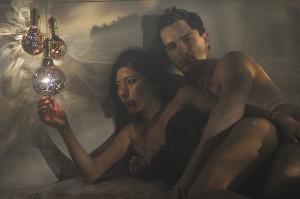 As vampires Aidan (Sam Witwer) and Suren (Dichen Lachman) finally consummate their decades-long attraction, Aidan totally falls off the blood wagon. Guided/tempted by Suren, he drinks a few humans dry. We see in flashbacks that when Aidan’s protégé Henry (Kyle Schmid) first bedded then cheated on Suren back in 1930, the vampire princess was so angry and upset that she killed a human at a public soiree. Suren’s vampire queen mother (Deena Aziz) had all the human witnesses killed and “grounded” Suren – that is, literally had her buried in the ground – until Aidan dug her up recently, on Mother’s orders. When Mother finds out that Suren and Aidan are involved, she is displeased. She orders them to get around to killing the “orphan” vampires made by the late Bishop. Suren and Mother quarrel, with Suren telling Mother that Mother was the one who decided that Aidan should be the one to retrieve Suren and serve as her guide. Searching for the “orphans,” Aidan encounters Henry; the two haven’t seen one another since that fatal 1930 night. Aidan lies to Suren and says he hasn’t seen anyone.

Ghost Sally (Meaghan Rath) feels alive again by possessing Janet (Amber Goldfarb) in order to have sex with Janet’s hunky doctor boyfriend (Martin Thibaudeau), despite the intense disapproval of werewolf housemate Josh (Sam Huntington). However, ghost Sally gets stuck inside Janet. Then she’s terrified by the dark, menacing shade she has seen several times now. When Sally does manage to get out of Janet, Janet starts drawing pictures of the phantom that frightens Sally. Janet even pays a visit to the roommates’ home, as she seems to have fragments of Sally’s memories, but Josh hurries Janet back out the door.

Josh, meanwhile, is trying to figure out how to design experiments that will bring him and girlfriend Nora (Kristen Hager) closer to being cured of their werewolf-ism, while providing a cure for being human to pure blood werewolf brother and sister Connor (Jon Cor) and Brynn (Tracy Spiridakos). When Nora’s physically abusive ex shows up to visit her at the hospital, Connor eggs Josh on to beat the guy up. Josh tracks the guy down and almost hits him with a wooden post before Kristen shows up and prevents Josh from committing serious assault (at the very least). Kristen tells Josh that even though he’s a wolf, he’s not the jealous guy who beats up other men, and that’s why she loves him. Josh loves Nora, too. However, when Brynn gets Nora alone, the novice werewolf confides that she has stalked her ex-lover and fantasized about entering his home in wolf form. That night (if we are to believe what we see), the ex is visited by three werewolves that converge on him. In the morning, Nora is naked in the woods, curled up between the equally unclothed Brynn and Cor.

After all her angst at being “cursed,” it’s interesting but not at all out of character for Nora to long to let her inner wolf roam free. Indeed, it’s a pleasure to see a character go from denial to experimentation, rather than keep to a single attitude which in any case seemed somewhat at odds with the show’s mythology (werewolves aren’t a big symbol of restraint in anybody’s lexicon). Brynn at present seems genuinely sympathetic, though this may change. In any event, having Josh continue to be responsible and lock himself up at night while Nora gets in touch with her wild canine essence. It’s also not clear where Josh’s experiments are going, but this may yet prove fertile dramatic territory. Hager does a particularly good job with Nora’s quiet confession of her strange new feelings.

On the flip side, while Sally’s forays into possessing the living may lead to some new story threads, right now they feel like reiteration of what we’ve seen before. Sally has already jumped into a stranger, had a great time, then felt emotionally guilty and ephemerally lousy about it; her adventures in “Addicted to Love” just seem like a somewhat more PG-13 exploration of the same theme. The dark phantom is reasonably creepy, but since we’re on a supernatural show rather than a straight soap opera, it feels like it’s definitely time for Sally to do some research on what the thing is and what she ought to do about it, rather than trying to hide in ways that clearly don’t work.

Finally, there is the Aidan/Henry/Suren/Mother situation. Again, Witwer and Lachman strike sexy sparks with one another in character. However, the more we see of Suren as a shrewd but rebellious and high-strung bloodsucker who would rather party than worry about vampire politics, the more we wonder how and why Mother chose her as an heir in the first place, let alone resurrected her. Is Suren meant to be Mother’s biological daughter? Is this some sort of Machiavellian scheme on Mother’s part so that she’ll look like an even better ruler by comparison or just (as Suren suggests) just a controlling ego trip? Stay tuned.

“Addicted to Love” certainly moves the plots forward, but we’re not yet invested in any particular outcome. It’s entertaining, and in the case of Hager’s Nora somewhat affecting, but it’s not fully compelling.