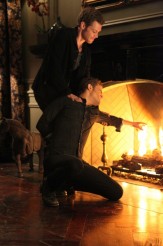 TV Review: THE VAMPIRE DIARIES – Season 3 – “Bringing Out the Dead”

All about family and what that means in Mystic Falls

So the new episode of THE VAMPIRE DIARIES is all about family. “Bringing Out the Dead” has some truly touching moments, and then some nice shockers and twists as usual. What exactly does family mean to our Mystic Falls crew? The ties that bind are tested and tightened in some cases as everyone gets put through the paces and more plots against Klaus (Joseph Morgan) move forward.

The biggest deal of this episode is the mysterious locked coffin that Stefan (Paul Wesley) took from Klaus along with the other members of his family comprised of original vampires. Klaus did find his family, but the fourth coffin was spirited away by Damon (Ian Somerhalder) to a secret location beneath the Lockwood Estates.

Bonnie (Katerina Graham) and her mother Abby (Persia White) furiously try to work magic on the coffin to get it to open while Stefan and Damon distract Klaus and Elijah (Daniel Gillies) with a sort of truce dinner. The witches manage to get the coffin to spring open but what’s inside?

Meanwhile Elena (Nina Dobrev) and Caroline (Candice Accola) fine Caroline’s dad Bill (Jack Coleman) stabbed to death in the hospital. Poor Bill. He just got mauled by Tyler’s (Michael Trevino) fuzzier side last episode and now this one starts off with him sliced and diced. Bill does have vamp blood in him, so he won’t really die, he’ll just be a vampire (which is the one thing he hates the most). So as a result of those feelings Mystic Falls loses it’s only gay character. Boo. This was kind of a crappy trick worthy of Joss Whedon to bring Jack Coleman back for two episodes only to kill him off. Caroline and her Mom (Marguerite MacIntyre) have to pull together and grieve for this new and sudden death in the family.

Oh yeah and Alaric (Matthew Davis) gets sliced and diced as well. Elena kills him to save him (since he’s wearing his magic ring) and he does come back. I feel bad for Matthew Davis.  I don’t think they have any idea what to do with him besides kill him off over and over on the show. Alaric has had other storylines that were more important and central to the overall arcs of seasons, but this season he’s a bit of a dud.

So one of the big questions is who is offing first Caroline’s dad and then Alaric? A lot of thoughts turn toward Tyler, who was just starting his sire bond breaking last episode. If it is him, this feels like a good way to make his character an expendable commodity. Tyler can’t be left running around if he’s just going to keep offing the good guys. I’m betting money that if he needs to be taken down it will end up being Caroline that does it. Out of love. She used to be Miss Mystic Falls…..remember?

So the big ending shocker is that Klaus’ mom (who was thought dead this whole time) is the vamp that was actually hanging out in the locked coffin. She’s so thrilled to have her family all together that she forgives him and wants them all to be happy and form their own band to tour with Justin Bieber. OK….not really that sunshine and rosy….but I was expecting her to show up and eat Klaus’ heart or something. Time will tell. This whole family of original vampires is a bunch of shifty eyed ho’s, so you never know who they will turn on next.

Related Link: The Season 3 Scoop on THE VAMPIRE DIARIES and its future from executive producer Kevin Williamson

Related Link: TV Review – THE VAMPIRE DIARIES – Season 3 – “The End of the Affair”

Related Link: photos from The CW’s THE SECRET CIRCLE