Exclusive Interview: Nina Dobrev on her two sides of THE VAMPIRE DIARIES 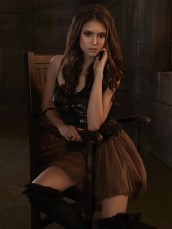 Exclusive Interview: Nina Dobrev on her two sides of THE VAMPIRE DIARIES

The actress talks playing two characters and getting to kick butt 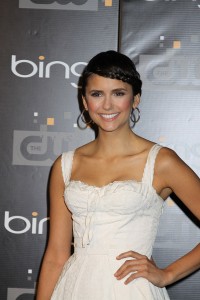 On the CW’s THE VAMPIRE DIARIES, now in its third season Thursdays at 8 PM, Nina Dobrev stars as Elena Gilbert. Elena always thought she’s just a normal teenager living in Mystic Falls,Virginia, until the youthful-looking vampire Salvatore brothers, Stefan (Paul Wesley) and Damon (Ian Somerhalder) returned to town. Elena soon found herself in love with the ethical Stefan and fighting off her attraction to the homicidal but beguiling Damon.

Then Elena found out she has a vampire doppelganger, Katherine (also played by Dobrev), who the Salvatore brothers were both involved with back in the Civil War days. As if that’s not complicated enough, in Season Three, Stefan has become a badass, Damon has developed a conscience (sort of) and Elena in more emotionally torn and physically endangered than ever.

At a party thrown by the CW, we caught up briefly with Dobrev to get her thoughts on all these developments.

ASSIGNMENT X: When you were first cast as Elena, did you know that you were also going to be playing her vampire doppelganger Katherine?

NINA DOBREV: No, I wasn’t told. I knew that I was playing Elena, who is this sweet, wholesome girl in a tragic scenario, and here we are later, she’s being hunted, and I’m also Katherine, who is crazy and psychotic, but it’s been awesome. It’s been a great arc.

AX: Given all of the twists and turns that Elena and Katherine have taken, do you have a favorite between them at this point? 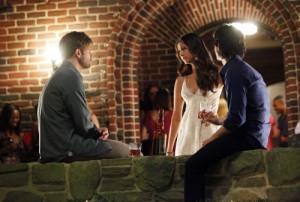 AX: Are you having fun playing off the more badass Stefan and perhaps slightly mellower Damon this season?

DOBREV: Yeah, because their roles are definitely reversed. Stefan is now the mean guy and Damon is becoming the hero and as Elena, I get to see both sides and I get to act alongside both of them.

AX: A lot of male actors say one of the things that made them want to get into acting was the fun of doing fight scenes. When you were thinking about becoming an actress, were you hoping, “Maybe I’ll get to hit or bite somebody?”

DOBREV: I think watching Angelina Jolie movies is always kind of inspiring and awesome. The guys get to do [that kind of fight action] on a weekly basis and kick butt, and some of us [women] get to do it, depending on the episode. But it is really cool. I remember watching [Jolie in] TOMB RAIDER and there’s this woman who’s beating up all of the guys. It does feel very empowering.

AX: What would you most like people to know about VAMPIRE DIARIES this year?

DOBREV: Now that we’ve introduced new characters, the dynamics have changed, and it feels like a new, edgier, different, exciting show and it’s really cool.