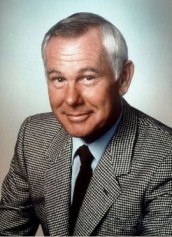 This project, set to air in May 14, celebrates the 50th Anniversary of Johnny Carson taking over THE TONIGHT SHOW from Jack Paar and changing the face of late night forever.

A private person, Jones admits that Carson didn’t really want to participate in a documentary on his life – at least in his lifetime. And after 12 years of writing to him, he finally got a call from the talk show host in 2002.

“I thought it was a joke when a PA said, ‘Peter, Johnny Carson on 601,’” recalls Jones and then there was Carson was on the other line. “He said ‘Peter, It’s Johnny Carson. I want to tell you, you write a damn fine letter, but I’m not going to participate in anything on my life because, you know what? I don’t give a sh**. One day something may get done, and you know what? You’re probably the guy to do it, but it will never happen while I’m alive. I’ve done everything I’ve wanted to do. I’ve said anything I want to say. There is nothing more.”

The extensive documentary includes interviews with three of Carson’s four wives, comedians who were influenced by him and unprecedented access to all of THE TONIGHT SHOW archives.