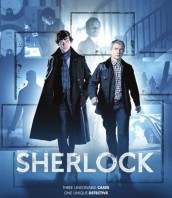 Their co-production with BBC is a hit in the U.K. and will air in the states in May

The current Second Series of the BBC/PBS co-production of SHERLOCK has been breaking records in the U.K. and even though PBS won’t air the episodes until May, talk of a third series is inevitable.

While speaking at the PBS session for MASTERPIECE MYSTERY! which airs SHERLOCK under that banner, actress Lara Pulver who plays Holmes foil Irene Adler in Series 2, spoke about the show’s impact her native U.K.

“It’s resonating hugely within the British audiences, which is very exciting and there’s more scope for these two characters [Holmes and Adler],” admits Pulver.

As for whether Benedict Cumberbatch will return for a Series 3 (he’s got a hot feature film career starring in both WAR HOUSE, TINKER TAILOR SOLDIER SPY and nabbing a pivotal role in the upcoming STAR TREK 2), the actor, speaking via satellite, teases about his interest in returning.

“You might say, it’s quite hard to make it back after the end of the last episode,” says Cumberbatch trying to be mysterious. “I’m going to only tease you with, ‘I would like to.’”

After that statement, MASTERPIECE executive producer Rebecca Eaton adds, “Yes, he will be. Yes.” Then she looks at Cumberbatch on the monitor and adds, “Right Benedict?”