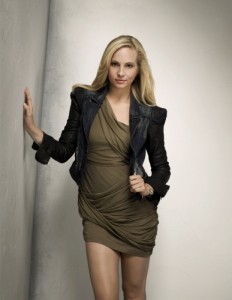 In THE VAMPIRE DIARIES, now in its second season on the CW (airing Thursdays at 8 PM), most of the bloodsuckers are deadly serious. Stefan (Paul Wesley) constantly grapples with his determination not to kill despite his instincts, as well as protecting his mortal love Elena (Nina Dobrev), whose vampire doppelganger and ancestress Katherine (also Dobrev) is determined to win Stefan back. Then there’s Stefan’s brother Damon (Ian Somerhalder), who has bouts of homicidal behavior when not making plays for both Elena and Katherine.

But in the midst of all this is Candice Accola’s Caroline, Elena’s high-school bestie who just got turned into a vampire. Sure, Caroline has drama of her own, what with being in the center of a love triangle between human boyfriend Matt (Zach Roerig) and werewolf admirer Tyler (Michael Trevino), but she’s got an irresistible zest for unlife that makes her a great source of lightness amid the otherwise often dark emotions

ASSIGNMENT X: When did you find out that Caroline was going to become a vamp?

ACCOLA: I got a lovely call from [executive producers] Kevin Williamson and Julie Plec, giving me the heads-up right before we went into Season Two. So I had a little bit of a premonition, but things change all the time, so it’s never really part of the script until it’s on the page. So yeah, I knew pretty early on, but I’m glad that it remained a secret until it aired. 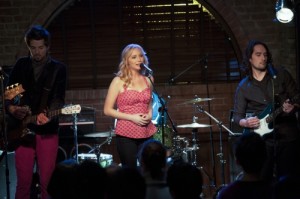 AX: Is Caroline a vampire in the L.J. Smith books?

ACCOLA: She is not. And that was one of the main reasons everyone constantly asked when the show first came out, did we read the books? Personally, I did not, because I was told by the writers that they were going to use it as a skeleton and not necessarily as the concrete storyline. So Caroline was not a vampire in the books.

AX: One of the principal sources of humor and humanity in the show is Caroline’s struggle with being a vampire and fighting with her collision of appetite and ethics. How does that work for you as a performer?

ACCOLA: Basically, babies are cute because they’re just figuring things out for the first time and everything is brand-new. I mean, those are the best times in your own personal life, when something’s the first time, so I think that’s been a wonderful thing that the writers have done was to create a character that is going through the transition wholly where you get to see it all for the first time, so yeah, it is very, very fun to play, and personally, I don’t think I would have caught on as quickly as Caroline does. She’s caught on very quickly. 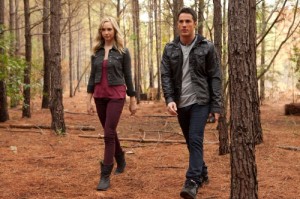 AX: Does it help that she’s got a couple of vampire mentors?

ACCOLA: Yeah, she’s got a cheat-sheet in the form of Damon and Stefan. Preferably Stefan, because Damon keeps trying to kill her, but yeah.

AX: It seems like Caroline still wants to maintain her friendships from high school with human Elena and witch Bonnie [Katerina Graham], though is the friendship with Bonnie still a struggle, with Bonnie being so anti-vampire?

ACCOLA: The relationships amongst the women on the show have gotten a little bit sidetracked throughout this season, just because, whether it’s romantic triangles or whether it’s [other problems], they’ve got their own personal dramas that they’re trying to figure out. In the episodes coming up, you will start to see the women leaning on each other a little bit more, which is a beautiful thing, because you need those friendships.

AX: Caroline’s relationship with her vampire-hunting mother, who’s the town sheriff – where is that going?

ACCOLA: Actually, Marguerite [MacIntyre, who plays Caroline’s mother Liz] hurt her leg, so she actually had to go get surgery and had to have time to recover, so it might feel like a little bit of a hiatus from the Caroline and her mother relationship. It’s not anything storyline-based, it all just has to do with Marguerite’s needed time to heal, but we will start to discover that more. I know Marguerite is supposed to be coming back to the show pretty soon. 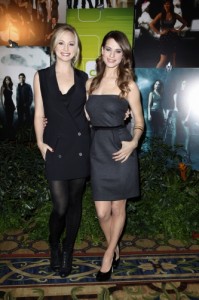 AX: Caroline doesn’t feed off humans these days, but when she started biting people, did you have to work on technique, where you’d say to your fellow actors, “I’m approaching your neck …”?

ACCOLA: I’m so my mother’s child in safety first. Most of the time, you’re meeting that person that day. It’s like, “Hi, I’m going to be biting you.” So you let them feel the teeth, and I make sure that my mouth is closed. It’s kind of more just like a peck [laughs] – it’s like I’m trying to give them a hickey as opposed to really bite their necks.

AX: Did you have to practice talking with the teeth in your mouth?

ACCOLA: The first set that I got actually had a bar, very much like a retainer, and I couldn’t talk in them at all and we kept making a joke that that’s going to be the new thing, like, Caroline has a lisp, because she can’t talk with her teeth yet [laughs], like, “Thefan, thop it.” But actually, now they just have two caps, so it’s very, very easy to talk.

AX: How do you feel about playing Caroline overall?

ACCOLA: She’s awesome. It’s just been a really fun season. I’m very grateful for the opportunities the writers have given me as an actor and as the character on the show.