The actor talks about playing showmanship vs. self-preservation in the new ABC horror series 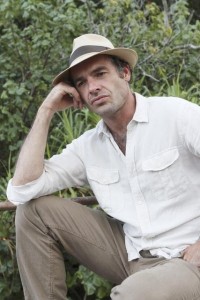 There has been plenty of horror on television, and there have been pseudo-documentaries on television, but THE RIVER, airing on ABC Tuesdays at 9 PM, is the first narrative series to combine the two.

With PARANORMAL ACTIVITY maker Oren Peli as one of the show’s creators, Michael R. Perry (PARANORMAL ACTIVITY 2, STEPHEN KING’S DEAD ZONE TV series, MILLENNIUM) as its other creator and Steven Spielberg as one of the executive producers, the series arrived on the scene with plenty of genre street – or waterways – cred, even before proving itself to be truly scary in its first episode.

In THE RIVER, a nature documentary filmmaker played by Bruce Greenwood disappears while exploring the Amazon River. Six months later, his wife and son head an expedition with another documentary crew to find the missing man. This new group encounters some stuff a lot scarier and harder to explain than piranha and anacondas.

Paul Blackthorne plays Clark Quietly, the director and producer of the film crew aboard the craft that is transporting the searchers. Quietly has ambitions and an ego, both of which clash with his survival instincts when the going gets tough. He also has a British accent, courtesy of English actor Blackthorne. Blackthorne is no stranger to the genre – he is still fondly remembered for his series lead turn as Chicago-based Harry Dresden in Syfy’s THE DRESDEN FILES and has also had major roles on THE GATES and on 24, among other projects. Behind the camera, Blackthorne has also been working on a feature-length documentary as producer/director.

It turns out that poor phrasing of a question about Blackthorne’s new gig can turn into an inadvertent straight line for a joke. To whit:

ASSIGNMENT X: How did you wind up in THE RIVER?

PAUL BLACKTHORNE: [laughs] Someone pushed me.

I wound up in THE RIVER because I went to see the producers, and they were doing all this improvisation, and I auditioned with that. It was quite interesting, because the character is quite similar to what I’ve been [doing in real life] in terms of producing this documentary for the last couple of years. So when we were doing all this improv for this show, [auditioning for the role of] the producer of the reality show, a lot of that was quite informed by what I’d been experiencing in my own life, having made this film for the last few years. 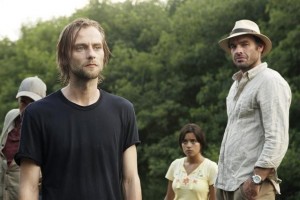 AX: What’s the documentary that you’re making in real life about?

BLACKTHORNE: A few weeks after the [2008 presidential] election, I drove across America with a friend of mine and interviewed the people of America as to how they felt about the notion of change that was being talked about in the Obama campaign and what they thought about that, and so we spent a month interviewing between New York and Los Angeles, and we’ve been editing that, and of course, as time’s gone by now, we’re sort of [wondering], well, is that change really at all possible. We’ll submit it to festivals and hopefully get a distribution deal. The working title is HERE IN AMERICA ONLY. That could change. That’s what I’ve been putting a lot of energy into. Turns out it takes a while to make these things. It’s like the car in the garage that you tinker on at the weekends, but what’s happening is, we’re basically pushing through to our final cut, so it’s very close to being finished.

BLACKTHORNE: [laughs] Yeah. You’ll have to speak with my producer about that. No, [Clark is] a good producer. He knows how to contrive situations and stir the pot. So it may not make him the most popular person at first, but it makes good television. All he’s interested in is making good television, so you’ve got to do what’s necessary.

AX: At what point does the balance between making good television and saving his ass from all of the supernatural entities in THE RIVER come to the fore?

BLACKTHORNE: Well, you see, that’s the conflict. That’s the nice interesting conflict about it, because he might be getting into a sticky situation, which might be endangering his life, but at the same time, part of this man is going, “Fantastic! We’re getting great television! But oh my God, am I going to survive this myself?” His default mode is definitely, “We’re getting good television,” even when he is in danger himself on occasion. But that’s the nice thing about the character, that moment when you flip into self-preservation, but from the “good television” mode.

AX: You’ve done a fair amount of horror/fantasy in your acting career. Are you happy to return to the genre, or does the documentary format of THE RIVER have such a different style that it feels like you’re doing something else?

BLACKTHORNE: Well, to me, it doesn’t really matter what the genre is; it’s about the character and the relationships, the story. That’s the main thing. This happens to be back in the supernatural genre, which is fine with me, and I enjoy that, but really, I suppose the other layer to this is that, given that it looks like you’re watching a reality show, that’s what was obviously adding another layer that I had certainly not done before. It’s enjoyable.

AX: The producers have said they gave all of the RIVER cast members a camera and had them actually shoot footage. Were you a part of that?

BLACKTHORNE: Yeah, I had a little period there where I was operating camera. Yes, you get to mess around and do a bit of camera operating as well. [joking] I’ll join the union next.

AX: Has any of the footage you shot wound up in the show?

BLACKTHORNE: Apparently, yes. I mean, who knows what’s being used at the end of the day, but the producers tell us yes, that some of our footage did end up in the show.

AX: Were you looking forward to getting in a boat and going to Hawaii?

AX: Is working in Hawaii like being away on a remote location, or do they have enough of a filmmaking infrastructure there where it feels like, “Okay, I’m working in Vancouver, as opposed to L.A.”?

BLACKTHORNE: It’s funny, because Hawaii is the furthest [major group of islands] from any other land mass, so you are actually the farthest away you can get from the mainland. But having said that, there’s complete studio infrastructure there and it’s just like having another well-traveled location.

AX: How was working there?

BLACKTHORNE: I had a blast. It’s fantastic. It’s great. I mean, we’re in Hawaii, shooting a TV show. You wake up in the morning, go off to these magical locations and get to ride up and down the river. So can’t complain.

AX: Have you had any contact with any snakes or hostile insects or other local wildlife?

BLACKTHORNE: Well,Hawaii is actually quite friendly in that respect. I was hiking in Kauai [after shooting finished], and there’s really nothing to be afraid of in Kauai, apart from sharks in the water and moray eels – one chased me out of the water. But on land, there’s actually nothing that’s scary. It’s all in the water.