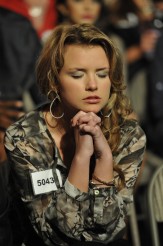 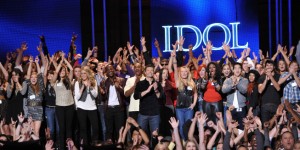 So after literally a month of craptacular auditions we are finally to the meat of the world’s greatest karaoke competition, AMERICAN IDOL.

The audition rounds are so eight season ago. They really need to truncate it and get right to the competition because it is no longer holds the interest that it once did.

Luckily, we are past that part now. Last year they finally gave us an extended look at the Hollywood Round, where the judges weed out the wannabes from those that can really belt it out. It was by far the best part of the show last year and will probably be this year as well.

While this is a hard episode to review because no one is voting on the performances and it is a clusterf*** of people getting up there and singing just little snippets, but at least we can see what is going through the judges’ minds in regard to who is good enough to be considered for the next round.

The first half of the show was dedicated to having a line of contestants get up and sing on stage with their peers. Those that did well moved along. Those that did not were given the unceremonious boot.

Among those that made it in the first day:

Those notable contestants that were given the hook included:

In all, 69 people were eliminated in the first night of the Hollywood Round.

The second half of the show was more of the same with more lines of singers and a host of them going though including:

The one notable that did not was Jim Carrey’s daughter, Jane Carrey.

Of course, this being IDOL, they had to end the show on a dramatic note with Symone Black falling off the stage in a nasty way. Not sure if she fainted or something else happened but it didn’t look good.

While this first part of the Hollywood Round was good and we finally got to see just all talent, the next episode will be even better as we get Group Night where much drama happens and some of the people that moved on get the boot because they can’t hack it.

One thing is certain, IDOL is heating up and it will only get better.