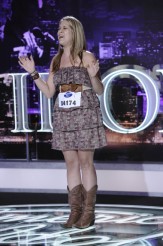 Luckily for us, this is the last of the auditions on the world’s greatest karaoke competition, AMERICAN IDOL.

The real show begins next week with Hollywood Week and hopefully we will get a similar treatment as we did last year where we get expanded coverage of the process as it is the most interesting part of the show – maybe even better than the individual performances when it gets to the Top 12. Not to beat a dead horse here (as I have said this in every audition I have reviewed), just start it in Hollywood Week next year and give us maybe one week of auditions as a roundup and two weeks or more of Hollywood Week.

If this is a real talent competition, that’s indeed what they should do. What have they got to lose at this point? The ratings are down, way down from the heyday, and this could get people interested in seeing how these people do during this part of the competition.

As I said this was the last stop in terms of the auditions so we got the usual amount of bad people doing their thing and never having a hope or pray of making it.

But as we look forward to next week’s festivities, here’s what I thought was either interesting or funny from “Auditions No. 7: St. Louis”: