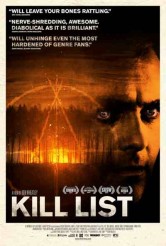 A British film that’s better on drama than on horror

There are great things, good things and unfortunate things about KILL LIST. The performances by leads Neil Maskell and Michael Smiley are gloriously naturalistic; we might be sitting next to a pair of good mates in a pub somewhere as they banter, argue and wax philosophical. The dialogue is similarly lifelike.

On the downside, there’s some reinvention of the wheel here horror movie-wise. By the time it gets there, we can’t quite believe that KILL LIST, which has so far felt very original and intriguing, is heading into such well-trod territory. If this was the conclusion that director/writer Ben Wheatley and co-writer Amy Jump wanted, a tiny bit more build-up would have likely been a good thing. The hints they offer throughout most of the film are nicely subtle; it’s just that once KILL LIST reveals itself to be part of a specific horror subgenre, viewers who know where this is likely going are immune to the intended surprise at the climax.

Then again, on the upside, protagonists Jay (Maskell) and Gal (Smiley) are such unlikely main characters for this type of story that we never question that they can’t see what’s coming and can’t really fathom it once it hits them, figuratively and literally. Jay is a working-class Englishman who has been out of work for eight months, something his wife Shel (MyAnna Buring) is constantly badgering him about. Their young son Sam (Harry Simpson) is traumatized by the screaming arguments and sometimes physical fights. Then Jay’s old pal Gal shows up with the offer of a job. Thing is, Jay and Gal are hit men. They don’t question the morality of what they do, although one of the targets on their “kill list” turns out to be such a nasty piece of work that Jay is inspired to try to do some research. There’s also a slightly peculiar bit of business that happens on the hits.

As KILL LIST is being advertised as a horror film, it’s no spoiler that, as stated above, this is where it goes. Anyone coming into the film cold would think for a good portion of it that the movie is a working-class British character study with some crime drama thrown into the mix – think MONA LISA or SEXY BEAST – and on this level, it’s extremely successful. We thoroughly believe in these people, and the bond between Jay and Gal is so rich and entertaining that we can’t help but like these guys, even though they’re in a vile business.

There’s a wonderful weird section when the horror aspect first makes itself fully known to the characters and to the audience. Because Jay and Gal clearly have no pop culture frame of reference, they don’t seem totally dumb for not guessing what’s going on. However, most of the viewers will, yet the filmmakers treat us as though we don’t, which is where things go a bit off-track. It’s fine in certain circumstances for us to be ahead of the characters, but it’s a problem if the filmmakers don’t realize that they’ve put us there. We get jerked out of what we’re watching by wondering if we are or are not supposed to understand what’s happening, and then when we get it, we’re so far into contemplating the meta-text that we wind up responding to the action in a cerebral manner rather than an emotional one.

Still, KILL LIST is well worth seeing. If it’s not entirely the shocker that seems intended, it’s certainly creepy, funny and startlingly lifelike for most of its running time, and that’s mainly what counts.