CD Review: Foxy Shazam – THE CHURCH OF ROCK AND ROLL 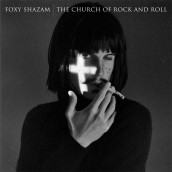 CD Review: Foxy Shazam – THE CHURCH OF ROCK AND ROLL

While the Cincinnatti, OH band’s previous releases definitely had the hooks and in many cases, comparisons to Queen rock and bombast, it’s their latest release that truly showcases their hard-rockin’ roots, mainstream ambitions and Glam swagger.

Produced by Justin Hawkins, frontman for the criminally underrated hard rock band The Darkness, there’s definitely some familiar territory here. Both groups have a way with a hook – and Hawkins has a way with bringing out the power pop, metal theatrics and yes, Queen layers into a satisfying whole.

There’s also that question of whether both bands were embracing rock’s past or putting their own ironic spin on the proceedings – yet when you can crank out songs like “I Like It” or “Holy Touch” that totally rock, where the inspiration or intent is coming from is not that important.

For the first four tracks on CHURCH, lead singer Eric Nally tears through the tracks with control, grace and those brilliant high notes all metal-friendly bands need as a pre-requisite. And guitarist Loren Turner cranks out one indelible lick after another. On “Wasted Feelings”, the Rolling Stones would kill for a lick like that on any of their recent recordings.

By the time the second track “I Like It” kicks in, you know exactly where you stand with this band – you’re going to love them or hate them, as Nally sings about the big-boned woman he’s obsessing over with the chorus  “That’s the biggest black ass I’ve ever seen/And I like it, I like it”.

And damn, is the accompanying music not catchy as hell. I like it too!

“Holy Touch” feels a lot like The Darkness, and in a good way, but it’s the fourth track “Last Chance At Love” that would sound sublime in any decade it landed. It has a killer guitar lick kicking things off, but it’s the mix of hard rock and accessible pop that would make this a perfect second single. It’s only one month in 2012, and this song will definitely make the 2012 Best of list, no questions asked.

The disc slows down a bit with “Forever Together” dealing with being a rock and roll dad and wanting to spend time with your child at the same time.

“(It’s) Too Late Baby” conjures up BAT OUT OF HELL era Meat Loaf, while “The Streets” tosses horns into the mix with another great chorus hook with harmonies Freddie Mercury couldn’t help singing along to on his car stereo if he were still around.

Your reaction to Foxy Shazam will depend on whether you’re content with pre-fabricated auto-tuned fads or looking for something a little more real, a little more dangerous and a little more raw. Here’s a band that has grown their sound over three albums and still have tons more to say. They also paired with a producer that has not only been where they have, but has also brought perspective and polish that really brings out the best of what they do, which is well, to rock your socks off.

Tags: album, CD, Foxy Shazam, Holy Touch, I Like It, Justin Hawkins, Last Chance At Love, review, the Church of Rock and Roll, The Darkness