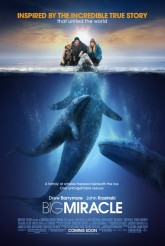 An unexpectedly smart, often funny film based on a real-life rescue of whales

A movie that is pretty much equally friendly to whales, whale hunters, Greenpeace and big oil sounds like a) something that can’t exist and b) would be pretty spineless if it did. Surprise – BIG MIRACLE, loosely based on an actual incident, manages to accomplish all of this and be pretty entertaining and somewhat gripping on top of it.

Granted, it seems very unlikely that a major studio would tackle this whale tale if the finale were catastrophic, but there is some tragedy and a lot of drama. The screenplay by Jack Amiel & Michael Begler, based on Thomas Rose’s book FREEING THE WHALES is also very clever about the human element, showing what each character has to gain and then letting a shared goal work its magic.

In October 1988, George H.W. Bush and Michael Dukakis were battling for the presidency of the United States, then-President Ronald Reagan was concerned about his legacy and environmentalists were worried about big oil incursions into the Arctic wilderness. With all this going on in the human world, three grey whales – evidently a father, mother and son – got trapped beneath the ice near the tiny Alaskan town of Barrow. In BIG MIRACLE, quasi-local reporter Adam Carlson (John Krasinski), who is up from the comparatively big city ofAnchorage, breaks the story. Soon his ex-girlfriend, Greenpeace activist Rachel Kramer (Drew Barrymore), is on the scene to try to organize a rescue, ready and indeed eager to alienate the native Alaskan residents, who hunt bowhead whales. Rachel and the locals are all prepared to object to Big Oil executive J.W. McGraw (Ted Danson), who is putting money into the whale rescue to make his company look good. What nobody expects is that self-interest among any number of unlikely people will create a team united in a genuine desire to get the whales back to the open ocean.

The overall tone of BIG MIRACLE is winsome but never cloying. Having Krasinski’s level-headed but ambitious reporter at the center keeps the movie from tilting too much in any direction. What’s refreshing here is that, true to life but not so true to this subgenre, no one is totally transformed by the experience. The humans involved come away able to recognize their human opponents as decent individuals, not faceless representatives of some monolithic foe, but Rachel doesn’t suddenly see the light about the indigenous Alaskans’ whale-hunting traditions, nor do they take her point that perhaps they shouldn’t be hunting fellow intelligent creatures. Nobody is thrilled about McGraw’s pipeline, and he is still unbothered about what the pipeline may do to the Arctic refuge. Very often, public relations considerations take precedence over a sense of right, wrong or even what can likely be achieved. The dialogue furthering this is often surprisingly funny without being nasty. Everyone here is intelligent and able to speak their mind succinctly – the only real villains (and they’re mild ones) are people who want to cheat, like a newsman (John Michael Higgins) who tries to steal the story out from under his colleague (Kristen Bell) once she’s done the hard work of breaking it.

Then there is the thrill of the whales themselves. Seen close up here, the whales trapped under the ice do look a little like the special effects creations they are, but the dynamics of the movie are such that we still feel a sense of awe when one of the characters visits them underwater.

Krasinski is a solid, inherently likable lead. Barrymore is totally unafraid to appear a little loopy as the single-minded Rachel, who spends much of the film as a raw nerve but has real edge when she’s explaining the public perception consequences of failure. Danson – in real life one of the founders of the environmental organization American Oceans Campaign/Oceana – has a good time with the crafty McGraw. John Pingayak is warmly authoritative as tribal elder Malik and Tim Blake Nelson has a suitable air of been through it all stoicism as Rachel’s Greenpeace compatriot.

The end credits are worth watching, as they show the real-life counterparts of many of the characters, giving credence to what have appeared as unlikely subplots, such as a B-story romance between a pair of supporting characters (the end credits show the real people getting married). There’s also a startling cameo by a famous/infamous real individual as the film ends.

There is some sorrow in BIG MIRACLE, but there is, per the title, great joy as well. But perhaps the biggest miracle in the film is that, no matter what you believe, you won’t come out of the movie feeling lectured or dismissed. There’s room in BIG MIRACLE’s world for not only whales, but for all of us humans, too.