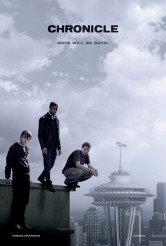 A good, fresh take on the superpowers genre

Two things should be noted upfront about CHRONICLE. The first is that, in itself, it’s a very good movie. The second is that it proves there are still new things to say about the genre of superpowers (“superheroes” would be a misstatement in this instance).

A “found footage” movie, CHRONICLE begins when teen loner Andrew (Dane Dehaan) obtains an old video camera and starts documenting his life, at least in part to fend off chronic violence at the hands of his alcoholic father (Michael Kelly). Andrew is more or less friends with his same-age cousin Matt (Alex Russell), who is prone to quoting philosophers and wishes Andrew would get out more. Matt is also friends with ultimate popular kid Steve (Michael B. Jordan), who is running for school president as prelude to a hoped-for career in politics. When Steve and Matt discover something very strange in an underground tunnel, they badger Andrew into coming along and videotaping their find. Soon after this evening, the tunnel entrance is blocked, but no matter – all three of the boys soon develop telekinesis (the ability to manipulate objects by thought and will), first on little things like Legos, then on big things like cars. Then they learn to fly.

Where CHRONICLE goes that this genre hasn’t gone before, at least on the big screen, is into what happens when superpowers are acquired by people who don’t hear the call of greatness. It doesn’t occur for a moment to any of the trio to zoom around trying to put out fires or thwart bank robberies, much less seek out super-villains to oppose. For awhile, the boys are bound by their awesome secret, playing pranks, impressing their peers with what seem to be magic tricks and planning no-airfare-required vacations. But then the combination of Andrew’s awful home life and his sudden popularity get to him – it’s the social equivalent of a diver surfacing too quickly, except that unlike the average diver, Andrew has the ability to express his confusion and frustration in very big ways. This leads us deftly and almost effortlessly to a climax that is absolutely earned.

Dehaan makes Andrew heartbreakingly sympathetic even when he starts to get creepy. Russell is likable and natural in portraying Matt’s easy decency.Jordan exudes the kind of charisma that makes us easily believe he’s destined to win elections. As Andrew’s inebriated father, Kelly is equal parts frightening, infuriating and pitiable.

Director Trank is sure-handed in capturing unforced human activity and usually gets the camera to be where it should without too much obvious manipulation.

The found footage format allows for a great deal, including wide shots when the main characters figure out how to float a camera. It also provides an excuse for keeping the camera at some distance from the primary figures in the climax, so that we’re not close enough to certain visual effects to require them to be pristine (which would be difficult on what looks like a fairly contained budget).

The format falters a few times – on at least one occasion, we’re wondering what camera, if any, is picking up the action. Also, as in many pseudo-documentaries, it’s not fully believable that characters would continue to run a camera at some points.

To be fair, the screenplay by Max Landis, based on the story he and Trank co-authored, tries to allow the characters to set the running camera down and forget about it frequently, but there are still some moments where it feels unlikely. Otherwise, the dialogue and characterization flows easily. There are few if any jarring words and behavior is fluid and lifelike. Even when things start going crazy, they go crazy in a way that seems a logical extension of what has come before.

CHRONICLE is a refreshing take on a certain kind of lore, with a point of view that is both novel and well-conceived.