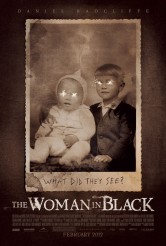 Movie Review: THE WOMAN IN BLACK

For those who have a fondness for old-school Hammer horror films, and even for those who have no idea what those are but just like spooky period ghost stories, THE WOMAN IN BLACK is a treat. This isn’t just an homage – Hammer is listed in the credits as one of the production companies. If this is how they’re going to return to the big screen, a big “Welcome back!” is in order.

Full of atmosphere thanks to director James Watkins, cinematographer Tim Maurice-Jones, production designer Kave Quinn and their associates, THE WOMAN IN BLACK is set late in Victorian-era England. Young lawyer Arthur Kipps (Daniel Radcliffe), still mourning the death of his wife in childbirth four years after the fact, has been allowing grief to interfere with his job (and somewhat with his parenting). His boss gives him one last chance. Arthur is to go to the remote village of Crythin Gifford and go through an enormous amount of paperwork left behind following the deaths of the owners of an estate there. It seems the local lawyer has been no help at all.

Arthur sets off by train, determined to do his job, and arrives to be absolutely stonewalled by the locals. He’s told that the clearly empty hotel where he’s booked a room can’t accommodate him, he’s initially refused transportation out to the estate and everybody wants him on the next train back to London. The only helpful and friendly person Arthur encounters is Samuel Daily (Ciaran Hinds), the wealthiest man in the county, who clearly doesn’t agree with his neighbors about the local situation. The house where Arthur is to complete his task is an enormous, remote mansion on a hill that gets cut off from the rest of the world whenever high tide comes in. The telephone has been invented, but the house doesn’t have one, so it’s isolated. It’s also full of darkness, dust, creepy toys, mountains of paper – and, as poor Arthur discovers, it is also very haunted by a really angry ghost.

THE WOMAN IN BLACK goes back and forth between having Arthur uncover what’s behind the haunting itself and the villagers’ odd behavior and simply being effectively very scary. Despite the movie’s vintage setting and appearance, contemporary audiences can easily understand why Arthur doesn’t simply cut and run (a good question in too many horror movies) – everybody understands the notion of putting up with just about anything in order to keep a paying job. Furthermore, there are explanations for elements that initially seem perplexing.

The screenplay by Jane Goldman, adapted from Susan Hill’s novel (which has also been made into a telefilm and a hit stage play) is very well thought-out and avoids overt clichés. Director Watkins also makes shrewd use of our expectations, as well as with everything on screen. A candle flame reflects in the eyes of a stuffed animal, giving the illusion of movement. We know what the filmmaker is doing and he knows that we know – which sets up the real chills all the better.

Radcliffe knows a thing or two about playing beleaguered heroes confronting supernatural forces. It is very much to his credit that we think of Arthur as his own person, an adult whose determination and sense of compassion are fueled by pain. There are no false moves here. Radcliffe indeed appears so much more mature than he did in even the last HARRY POTTER film that we are filled with new appreciation for that franchise’s hair and makeup departments, as it’s hard to believe Radcliffe looked so young there, even though HARRY POTTER AND THE DEATHLY HALLOWS PARTS 1 and 2 and WOMAN were made relatively soon in relation to one another.

Hinds is hearty and warm as the rational Samuel and Janet McTeer is affecting as his sometimes charming and sometimes unwell wife. Misha Handley has excellent comedic timing as Arthur’s four-year-old son and Liz White is properly terrifying as the title entity.

THE WOMAN IN BLACK marks a happily shivery return to a time when ghost stories were allowed to take themselves seriously and without irony. It displays a sense of real style and real fear, driven by mythology that works on both the rational and the visceral levels.