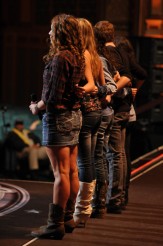 Was the first episode of Hollywood Round a new low for the world’s greatest karaoke competition, AMERICAN IDOL?

I was reading a slew of reports about showing Symone Black falling from the stage and ending the show that way didn’t do the shows credibility any favors because it showed it wasn’t really interested or caring toward the individuals of the show.

Credibility? Really? We are talking about a show that basically tells a bunch of amateur singers to get up on a big stage, stand in front of a host of people and dance, monkey, dance. OK, sing, monkey, sing. Credibility? This is the same show that parades a bunch of people that have no business auditioning either because they are whackjobs, fruitcakes or their elevator doesn’t rise to the top and makes fun of them. So showing the terrible tumble, in my mind, was just part of the whole circus that is this show. I looked at is more like “meh” than I did “OMG.”

The funny thing is that the IDOL producers must have thought the same thing because they pretty much glossed over the entire situation at the beginning and moved right along to the next order of business – group night.

Group night is by far the most chaotic part of the show as it forces singers that usually have no desire to sing with partners to do just that. If they can’t do it well, adios. As usual, popularity plays a large role in who teams up with whom and that isn’t always the best strategy as it is often the quirky people that are the best of the bunch under pressure and talent.

Most often it is those that find a group early and get right to business that end up being the best of the bunch. Those that struggle or are too picky about their groups, crash and burn or have some sort of a meltdown.

We saw much of the same in Season 11 as we have in other seasons of IDOL as groups struggled, some rocked it and drama dripped from the walls. One contestant got sick so she was treated like she had the Black Death, one that wanted to sing “Joy to the World” so bad she threw away all sorts of potentially good groups, one chick didn’t want to work with anyone and so she went down to the wire and plenty of other well manufactured drama. Credibility? Yes, manufactured drama. This is exactly what IDOL wants, they breed it. Of course, they are going to show every dripping dramatic moment including some chick taking a digger off the stage.

So how did the groups do? Uh, we have no idea … yet. Because they didn’t show the performances in this episode, instead they will show it next week. Now, I rag all the time about how IDOL doesn’t need to do two-hour shows all the time because 50 percent of it is filler. This is the one time you will ever hear me say they should have made these two hours and crank out the performances as well as the practicing. By the time the show rolls around next week, everyone will have forgotten who they were keeping an eye on and who was profiled and they’ll have to learn them all over again.

So if you enjoyed drama, this was definitely an episode for you. If you tuned in to see good singing in groups and see who advanced to the next round, nope, good luck next week. Credibility? Can you say an hour of filler? I can. I just did. And did Seacrest really pull a line from THE BACHELOR using “the most drama ever” line? Sad man, just sad.