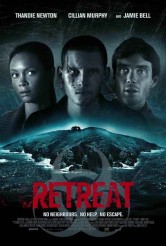 Isolation plus pandemic adds up to less than the sum of its parts, though the acting is strong

RETREAT is an entry in the subgenre of an isolated couple being menaced by a stranger. There’s a twist here, with the possibility of a pandemic lurking outside the door. What’s actually happening is something of a surprise,  but the screenplay by Janice Hallett and director Carl Tibbetts doesn’t set up the mystery in a way that keeps us guessing excitedly or fearful for the characters.

Married couple Kate (Thandie Newton) and Martin (Cillian Murphy) take a vacation on the isolated Scottish island where they honeymooned years ago. We soon learn that Kate miscarried a baby, and she is still extremely angry at Martin for not being there when she needed him and for not being as devastated as she still is by the loss. Then Jack (Jamie Bell), a bloodied stranger, turns up, barely conscious. He’s dressed in military garb and has a gun. He claims that his boat smashed on the rocks.

Jack also says that the reason Martin and Kate haven’t been able to raise anyone on the island-to-mainland radio is because of a deadly airborne pandemic that has attacked the population, with survivors holing up in their homes. Jack insists on blocking the cabin from both viral and human attack, saying that survivors may storm the cabin from outside, bringing the disease with them. Kate is hostile and skeptical, while Martin is a little more accommodating and open to the possibility that Jack is telling the truth. With three people stuck together in an isolated cabin, tensions soon flare.

It is possible to make these kinds of scenarios work, but certain ingredients seem necessary. The first is dynamic characters. Bell gives a thoroughly committed performance, with Murphy and Newton also showing conviction, but the characters are problematic. Kate starts out sulking, never a good way to make us care about her, and Martin seems excessively indecisive. There are too many moments when it seems either of them could seize control of the situation away from Jack. As for Jack,Bell provides him with a will of iron and a well of deep feeling.

Under Tibbetts’ direction, RETREAT is physically beautiful, from the island’s terrain to the picturesque house to the light that plays on the long grass at night. The action seldom puts us on the edge of our seats, though – too many confrontations fail to escalate, so that we wonder what’s going on, not because our brains are being teased, but because there seems to be a lapse in narrative and emotional logic.

Special features on the DVD include a making-of featurette and a photo gallery. The sound mix on the disc is extremely good, but unusually loud – viewers may wish to turn down the volume on sound equipment a decibel or two before proceeding.

RETREAT is worth seeing for the actors – fans of any or all of the three will be happy with the strong work and plentiful screen time – but as a thriller, it’s short on real chills and suspense.