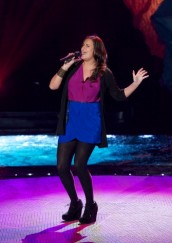 The drama was thick in the previous episode of the world’s greatest karaoke competition, AMERICAN IDOL, as the judges narrowed the competition to just 24 semi-finalists.

All the while the drama was playing out they walked contestants through a dark hallway, through smoke and flashing lights and into the rotunda of doom. A very silly ending to the show that begins the live performances next week.

While most of the people that were eliminated we had seen very little of, would the same happen this episode as they continue to try and get down to 12 men and 12 females that will compete for your vote.

Adam Brock was the last person we saw last night and they left it on a cliffhanger … would he make it? Usually this means they sent that person along because that would just be too cruel to postpone it an entire day just to say get the hell out. Yep, Adam is in the Top-24.

The first new person we see is Jeremy Rosado, who we have seen quite a bit of during the entire competition and he has shined so it would be a surprise if he didn’t move along.

Shannon Magrane has been very much in the spotlight during the competition thus far and for the most part has done really well. It would be a surprise if she was not chosen among the Top-24. Yep, she’s in.

Some dude named Scott Dangerfield, who we have not seen pretty much at all this year, didn’t make it.

Skylar Laine was up after the break and after we get her history on the show, they decide to move her into the Top-24. Hallie Day also made it. So did some guy named Chase Likens, who we have not seen much of, and Aaron Marcellus, who we have seen quite a bit of.

After another break, Deandre Brackensick, who I think we have seen maybe twice, makes it into the Top-24.

Jermaine Jones, the dude with the deep voice, was next. And if you are counting, you know that he’s not making it because there are two dudes left that get one slot and already 11 guys have been confirmed. And my math is correct as he does not make it.

Mass drama time as with one spot left for the girls the final three chicks go to the rotunda of doom and just like HUNGER GAMES, they will battle to the death. What’s that? They don’t battle at all just sit there and listen to the judges’ banter on … well that’s no fun. Anyway, Ariel Sprague, Shelby Tweeten and Holly Cavanaugh get judged and Holly, who we have not really seen much, moves into the Top-24.

The final judgment comes between youngsters David Leathers Jr. and Eben Franckewitz. Much drama, blah blah blah and Eben is in the Top-24

So that’s it and the real competition begins as you get to vote next week.

The Top-12 women include: