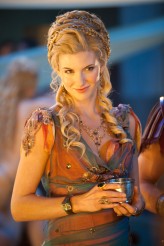 Things heat up for both sides of the story

So my biggest complaint with the new series of SPARTACUS: VENGEANCE is that the pacing hasn’t been on par with the other series. I’m honestly confused as to whether the pacing is better in “Empty Hands” or it just seems better because there’s more action (in more than one sense of the word).

Again we have two stages of action in this episode. One which follows Spartacus (Liam McIntyre) and his rapidly dwindling group of people who are racing through the woods toward Vesuvius after rescuing Naevia (Cynthia Addai-Robinson) from a Roman mine. The second stage is back in the House of Batiatus and follows Lucretia (Lucy Lawless) and Illithyia (Viva Bianca) as they grasp and grapple with not only politics but each other in their race for vengeance (but against whom?).

The Spartacus storyline for this entire episode is essentially running, fighting in slow motion and then more running. While there are some nice moments here and there, this whole pursuit through the forest gets tiresome early on, and I defiantly found myself more interested in what the evil bitches of the House of Batiatus were up to. Mira (Katrina Law) gets in some amazingly savage fight work in this episode and she was kind of stunning to watch go feral. The other notable moment from the forest is wounding and race for life of  Nasir (Pana Hema Taylor). I am relived that the writers decided to have him live to fight another day since he is one of two openly gay characters on the show.

So then up in the house on the hill, Crixus (Manu Bennett) and three of his men have been captured and returned to the house they once sacked and fled. You know this sh*t is going to get real at this point. Romans do not like to look bad and these slaves handed them a sound slap to the head by not only revolting against their masters, but by butchering everyone in sight. So yeah, Lucretia picks one man to be a blood sacrifice for the night, and the rest are to die in the arena including Crixus and Doctore (Peter Mensah). The torture scenes with the slave are some of the most awful on the series since the castration and crucifixion of the first season.

There are characters that I openly loathe at this point and want them to die horrible deaths. First up is that spoiled whore Illithyia. She reminds me of a really bitter, twisted Nellie Olson from LITTLE HOUSE ON THE PRARIE. She’s blonde and a bitch and always finds a way to get what she wants. Of course now that Lucretia took a ride on Illithyia’s dad, the saggy baggy camel, I have a feeling there are more plots in motion that we are only partly aware of. I want Lucretia to let Illithyia deliver, kill her off, and make off with the baby. Maybe even kill her in childbirth.

Then the other one I truly hate is Ashur (Nick Tarabay). Once again showing his true colors by stabbing people in the back during fights, and then killing the Roman commander so the fighting wont’ continue and end with Ashur dead. I haven’t found a way to dispose of him yet, but I have a feeling it will involve several of our main characters getting their revenge.

Naevia better shape up too. She was completely useless in this episode, and I realize that she’s been through a lot, but she used to be a much stronger character than this. She’s going to need to do a bit of atoning to get back in my graces, since so many people died to feel her and for the most part she just screamed (although she did finally get in one attack).