Exclusive Interview: Lucy Lawless flashes back to SPARTACUS: GODS OF THE ARENA and the end of her nights at the Roxy Theatre 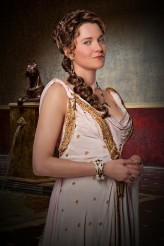 © 2011 Starz
Lucy Lawless in SPARTACUS - GODS OF THE ARENA
Interviews

Exclusive Interview: Lucy Lawless flashes back to SPARTACUS: GODS OF THE ARENA and the end of her nights at the Roxy Theatre

With the end of SPARTACUS: BLOOD AND SAND, it looked like the series might be gone indefinitely. The leading man Andy Whitfield was diagnosed with non-Hodgkin lymphoma and began treatment which put the future of the show in limbo. The series was a huge hit for STARZ, and so it was inevitable that it would return in a new six-episode prequel series SPARTACUS GODS OF THE ARENA which debuts tonight.

No longer are characters that you either loved or hated, or loved to hate are lying dead amongst the rubble of the gladiatorial school in this latest incarnation. Lucy Lawless and John Hannah are back reprising their roles as Quintus and Lucretia Batiatus, and ASSIGNMENT X got the chance to chat with Lawless in this exclusive interview about the future, or past, of her character, and what the future holds for her personally now that she is back home in New Zealand.

ASSIGNMENT X: Since this a prequel to SPARTACUS BLOOD AND SAND is your character Lucretia nicer this time around? 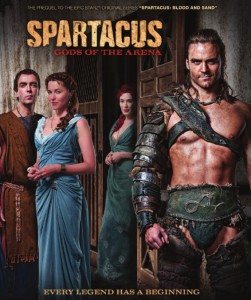 LUCY LAWLESS: Much nicer to start with. You’ll see Lucretia when she had hope and trust in other human beings. She’s wasn’t amoral, she’s just crazy about her husband and has some faith in humanity and you’ll see that eroded over the course of the prequel.

AX: Were you initially disappointed that your character was killed off at the end of the first season?

LAWLESS: I knew that before I took the job. I was a little bit sad because I felt that I hadn’t really scratched the surface of the character or what the character was. I didn’t feel that I had done particularly good work – I just wanted to go deeper. They gave me such great material in this prequel. My God, I got the chance to go deeper. I do like to think, and I hope that my best work is ahead of me, but I’m really proud of my work and the show.

AX: How was re-uniting with John Hannah for the prequel?

LAWLESS: It was so lovely. He was so joyful, and in rare form and it was a shorter period. He was away from his family for a shorter time period so it was easier for him. We already knew everybody, and everybody knew what the show was. I think everyone was much more comfortable as a whole in the environment. It was a bit fractured the first season.

AX: Is it tough to balance schedules between Los Angeles and New Zealand or do you just stay there full-time now?

LAWLESS: I don’t go back and forth. I just live down there, and moved home. I don’t know if I would come back to Los Angeles. My kids are very settled. I’m not sure I could get them to move now.

AX: So that means no more concerts at The Roxy Theatre?

LAWLESS: No. Sadly, they take so much energy to get up and running, and SPARTACUS burned me out. In a really good way, but it just took everything that I had. There was that terrible flu that everybody has for three months, and I had it for the entire shooting schedule of the prequel. You’re just not in good enough shape to do the singing, and it just didn’t present itself as an opportunity. I am sad about that part, but I am too tired.

CLICK HERE for more exclusive interviews, reviews, news and more on SPARTACUS: GODS OF THE ARENA