Exclusive Interview: SPARTACUS: GODS OF THE ARENA star Peter Mensah is Doctore of the house 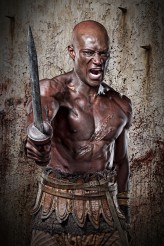 ©2011 Starz
Peter Mensah in SPARTACUS: GODS OF THE ARENA
Interviews

Exclusive Interview: SPARTACUS: GODS OF THE ARENA star Peter Mensah is Doctore of the house

SPARTACUS: GODS OF THE ARENA only has two episodes to go, but fans of the series can rejoice that season two of the first series, is heading back into production.

One of the main characters, who has the good fortune to not only survive the first season, be part of the prequel series, and return for the second season is Doctore played by accomplished actor Peter Mensah.

Mensah’s gleaming smile and charm are something that he doesn’t get to use in abundance on the series, but with the prequel he has gotten to play the softer side of his character.

While he was at the Television Critics Association in January, ASSIGNMENT X caught up with the actor to find out more about Doctore’s past and what directions the future might take.

ASSIGNMENT X: Was there anything in GODS OF THE ARENA that you didn’t expect?

PETER MENSAH: Oh, absolutely. I think that’s one of the draws to the show is there are such sharp turns to every character’s story. No matter how much I knew the character, and I had been briefed from the series bible about what had happened to him and when, pretty much by the second episode of the prequel, you end up with a massive twist. 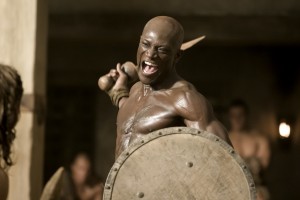 Peter Mensah in SPARTACUS: GODS OF THE ARENA | ©2011 Starz

AX: You get to smile in the prequel was that a nice switch for you?

MENSAH: Yeah. [Laughs] Let’s face it, the first series when you meet Doctore, he’s a severe character and he’s training men in the art of death. He doesn’t appear to be a very gentle man. You have no idea the kind of man he is. What we do in this prequel is you really get a chance to see what made him that way. Something happened.

AX: Are fans ever standoffish when they meet you, confusing you with your intimidating character?

MENSAH: [laughs] You know what, I’ve been approached more with this series than I have with any other show that I’ve been a part of. The fans of this show are phenomenal and I don’t think they’re intimidated by anything!

AX: Is there any one following that has surprised you more than others. I head you had a priest write in and express his adoration of the show?

MENSAH: I was in a restaurant and a Senator came over and introduced himself, and told me how much he loved the show. That’s how wide the net really is for the fan base. I’m surprised at every turn, and each one of these fans has been so gracious too. For the most part we’ve been really well received, I get a lot from customs people in airports when we are passing through. It’s all just fantastic.

AX: Do you get to give input into your character?

MENSAH: Obviously you are the guardian of your character. [Creator] Steven [S. DeKinght] and his team do their work, and we at least get to call in and ask why your character is doing something and how it ties to things they have done before. You’ve got to just let them do what they do, because lets face it, they’ve been pretty good so far. [Laughs]

AX: You’re in peak physical condition, but there is so much physicality to the show, do you have ice packs waiting at the end of the day?

MENSAH: Everyday. It’s standard Gladiator issue. You get home, you stretch, and you ice it down [Laughs].

AX: How much training did you have to do to learn how to use the whip?

MENSAH: It’s a once a day event, because you use it every single day and you see in the prequel he uses it in battle sequences. You really have to practice because you have about twenty guys in the room and you got to be able to launch it and catch what you are specifically aiming for without hurting anyone else.

AX: Were you surprised when they asked you to work on a prequel series?

MENSAH: It had been mentioned before, and there had been so much interest in the back stories that there certainly was a sense that we would have to approach that. I didn’t think we were going to do that much work on it. We knew something would happen, but maybe as flashbacks in the second season. Poor Andy’s condition has affected everything, and bless him, because he has been incredibly positive. He sends out emails and for the guy who went through it, he takes the time to comfort us all.