The series' showrunner chats about doing a prequel, green-screen, humor and DOLLHOUSE

Most TV series have their share of growing pains, but with Starz’s SPARTACUS, the behind the scenes complications have been almost as epic as the onscreen story. Shot in New Zealand with green-screen backgrounds to accommodate the surroundings of ancient Rome, the first season, SPARTACUS: BLOOD AND SAND, starred Andy Whitfield as the title hero in his days as a slave/gladiator. The show was a major hit for Starz in its thirteen-episode run last year, and its ending, with the gladiators rebelling violently against their masters, seemed to set the stage for a Season Two depicting the beginnings of the famous slave uprising. Then tragedy struck. Whitfield was diagnosed with non-Hodgkin’s lymphoma.

To allow the leading man time for treatment and recovery, series creator/show runner Steven S. DeKnight and his fellow executive producers Sam Raimi, Robert Tapert and Josh Donen decided that they would do a six-episode prequel season, SPARTACUS: GODS OF THE ARENA, set five years before the events of BLOOD AND SAND, depicting the rise of the gladiatorial business run by Batiatus (John Hannah), a Season One regular who died at the end of the initial run. The star gladiator this season is cocky young Gannicus, played by Dustin Clare. Although Gannicus didn’t appear in Season One, Spartacus had a key general named Gannicus, so it’s possible the character may reappear in future seasons. 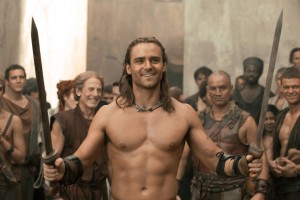 SPARTACUS: GODS OF THE ARENA is currently running on Starz Friday nights at 10 PM. As GODS OF THE ARENA was getting ready to air, there was more bad news. Whitfield’s condition prevented him from returning to work. The star gave his blessing to SPARTACUS continuing without him and Season Two will go forward with Australian actor Liam McIntyre taking over the title role.

In Part 1 of this exclusive interview, DeKnight talks to us of where SPARTACUS has been, where it’s going and where it is right now.

ASSIGNMENT X: Had you known that Andy Whitfield wouldn’t be able to return, would you not have done the prequel season and moved immediately on to Season Two and a recast?

STEVEN S. DeKNIGHT: You know, I’m not sure if we would have. The thought was, “If he’s not okay, we pull the plug,” because he is Spartacus. That’s a tough question, whether or not we would have just closed up shop for purely emotional reasons, I suppose if Andy had said, “Look, I want you guys to continue on, recast,” we probably would have went down that route.

AX: That is ultimately what happened after you made the prequel season, GODS OF THE ARENA …

DeKNIGHT: Yeah. It was a lot of talking and a lot of wondering, “Is it possible? Can we do it? Will the audience accept it?” But ultimately, there are so many great elements of the show, and so many great people and such a great story to tell, and it’s been a success for Starz, and the final decision really for me was when Andy said, “I want you guys to continue with this story without me, because I can’t do it, but I want it to go on.”

AX: What was the genesis of doing a season-long look at the characters’ pasts?

DeKNIGHT: I was planning on doing a flashback episode midway through Season Two, so we took that and we blew it up into six episodes and added quite a bit more to it. We [thought we] were going to be off the air for about eighteen months to give Andy a chance to recover and shoot, so we wanted to find something to keep the show going and also add to the mythology of the show.

AX: Is Andy Whitfield in GODS OF THE ARENA at all?

DeKNIGHT: He’s just in a wraparound bookend at the beginning of the season.

DeKNIGHT: It was a bit of all three, but mostly for the audience. For a first-year show, where we’ve got a little bit of steam going, to be off the air for eighteen months is a killer. Who knows where people’s interests will be in a year and a half. So we wanted to keep the train moving.

AX: You have been quoted as saying you’ve come from “the Joss Whedon stable.” Do you have a feeling of being in the Sam Raimi/Rob Tapert stable now?

DeKNIGHT: Oh, of course, there’s a Rob Tapert/Sam Raimi/Josh Donen machine, which is a great thing to be a part of, but besides that, the great thing about it is, we’re all doing something different. This is definitely something that’s a little bit outside the realm of what Rob and Sam and Josh have done in television before. We’re all very excited about that, about trying something new.

AX: Is this your first solo gig as a show runner?

DeKNIGHT: Oh, you know, what’s that phrase, “Heavy is the head that wears the crown”? It’s great, it’s a time commitment like I’ve never had in my life, because there is no downtime. If you’re not actually in the room breaking stories or writing a script, you’re having meetings about this, that and the other thing.

AX: Are you calling your old BUFFY/ANGEL/DOLLHOUSE boss Joss Whedon and going, “How did you do it?”

DEKNIGHT: I don’t know how he had three shows going at the same time. I know it helps that he actually never sleeps. I unfortunately like eight hours and perhaps a mid-afternoon nap, which slows me down.

AX: Any Whedonverse folks working on SPARTACUS on either side of the camera?

DeKNIGHT: Jed Whedon and his wife Maurissa Tancharoen – those are the two people we’ve brought on [as writers] from the Whedon world. No [actors], although I’ve got to buzz James Marsters up. I’d love to have James come do something for us. 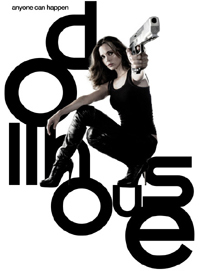 AX: Speaking of Joss Whedon, how was directing the DOLLHOUSE episode “The Target”?

DeKNIGHT: You know, it was the most fun I’ve had directing. I loved working with that cast, they were all fantastic. Eliza [Dushku] was wonderful. Harry Lennix was a joy to work with. The entire cast was fantastic. It was also the most grueling shoot I’ve had, because we had a lot of outdoor location shooting in the woods, on the river, rock climbing – it was a brutal shoot, but I had a great time.

AX: After that experience, are you happy that most of SPARTACUS is green-screen, so as a producer, you don’t actually have to go to the woods or the desert?

DeKNIGHT: You know, another great thing about shooting on green screen is purely time management. Being on outdoor locations sucks so much of your time just getting the equipment in, and you have limited amount of light, you’re at the mercy of the weather – it’s extremely difficult. And it always ends up costing you in the quality of what you’re doing. You have to cut a lot of stuff, you have to move faster than you should. So I’m happy to be on a nicely air-conditioned soundstage.

AX: What kind of cameras are you using for all of the high-speed, slow-motion shots?

DeKNIGHT: For the high-speed, we use the Phantom camera, which is just a fantastic piece of equipment. The great thing about the Phantom – it’s a digital camera that you can run super high-speed. We usually shoot the really high-speed stuff at about a hundred frames per second and directing, when you’re using high-speed, before the digital age, you would always use the Arri [Arriflex], which was notorious for jamming, and you never knew what you got until you got the dailies. With the Phantom, you immediately play it back and you see if you got it.

AX: Is there anything you learned shooting the visual effects in Season One that helps as you go forward?

DeKNIGHT: Oh, yeah. If you look at Season One, you see how the visual effects got better as we went along. It was a steep learning curve. It’s a combination of everything. It’s learning how to do this on a TV budget and timeframe and it’s just dialing it in and figuring out what works the best. I think we’ve got it down to a science now and we’ll always try some new things. I can’t tell you what they are, but we’re always experimenting and seeing how we can push the medium forward.

AX: How much of the sets exist practically and how much exist digitally? I mean, do you have real sand on the ground?

DeKNIGHT: Yes, we have real sets, we have real sand. The digital elements are pretty much reserved for background, sky, the actual arena. Our arena set is a huge semi-circle of sand and the [area] where the important people sit and the chutes where [the gladiators] come out – all of the fans in the stands are CGI-created. 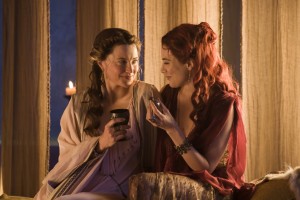 DeKNIGHT: Well, you know, for the most part, their hygiene is better.

AX: I take it you’re referring to the Comic-Con audience.

DeKNIGHT: Yes. It’s always a great feeling to have a crowd of people who are excited about what you’re doing. It was absolutely overwhelming. We got a very warm reception the first year, when we just showed the trailer, but after everyone had seen the show, they really went wild for it.

AX: Most of what you’ve written prior to SPARTACUS is contemporary. How is it working in the world of B.C., away from modern slang?

AX: Do you have to be careful not to go for too much humor?

DeKNIGHT: You know, actually, in the first [SPARTACUS] script that I wrote, we did go back and I did tone down a lot of the funny. There is humor in it, but the thing that we didn’t want to do was the BUFFY/XENA/HERCULES kind of humor, because it’s just really not that show. We really found that out early on in the tone, that there could be levity, but not that kind of witty turn of phrase banter.

AX: Have you had to bone up on sword action to conceive the action for episodes?

DeKNIGHT: The sword-action stuff comes under the heading of the stunt coordinator. The action scenes in these scripts are spelled out. All the important moments are very detailed. I want the stunt coordinator to come in and bring his own amazing stuff. That’s his profession. He knows that stuff a lot more than I do. Our stunt guys are fantastic, and they start working on it as soon as they get a script, and then they bring in the actors and they work on it. So it’s usually a couple of weeks to prep for a fight. For instance, in [Season One] Episode Five, when Crixus and Spartacus fought Theocoles, all together, the amount of time we spent shooting that fight with second unit and pick-up shots, I think it was eight days to shoot that fight, which is unheard-of in television.