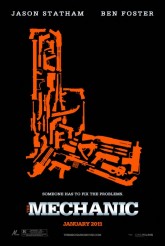 The 1972 original film THE MECHANIC starred Charles Bronson, Jan-Michael Vincent and Keenan Wynn. The 2011 remake has Jason Statham, Ben Foster and Donald Sutherland, respectively, in the roles. Writer Richard Wenk updated the screenplay, which is also credited to original writer Lewis John Carlino, who gets story credit. The structure is sharp and under Simon West’s direction, the plentiful action is punchy, including one vehicular sequence that seems to out-detonate both THE TOWN and INCEPTION. However, the real reasons to check out this shoot ‘em up tale of assassination and vengeance are the performances of Statham and particularly Foster, who make an electric combination.

Statham plays “mechanic” Arthur Bishop, a loner hit man who is considered the best in the game. However, a sense of obligation kicks in when Foster’s Steve McKenna, son of Arthur’s old friend and mentor, asks Arthur for training. The pros and cons are almost the same in this proposition: Steve has a streak of violent rage that makes him deadly but also dangerously unpredictable. Also, Arthur has a dark secret that the audience knows, but we’re kept guessing as to how Steve will react if and when he finds out.

The plot rolls forward proficiently. Given that we can surmise who the real bad guy is very early on, the story still manages to pack a few surprises and what feels like a lot of grit. Although Statham is the center of gravity here, exuding absolute proficiency with a teasing hit of conscience, Foster provides the intensity. Even if we didn’t get a fair amount of verbal exposition about Steve’s volatile past, Foster keeps us guessing as to whether this virtually abandoned young man is a full-fledged psychopath or someone full of rage still capable of responding to a father (or at least older brother) figure.

Sutherland, as usual, is a thorough professional and a presence of great charm and Tony Goldwyn is all business as Arthur’s primary employer. Mimi Anden is appealing as a friendly prostitute, albeit her role is designed entirely to provide what is evidently required sex scenes and to establish Arthur’s heterosexuality (Steve gets his own female sex partner for apparently the same reasons).

THE MECHANIC isn’t precisely a classic, but Foster’s performance and the ferocity of some sequences elevate it above the genre median.