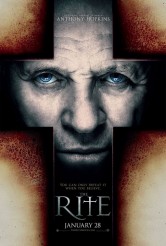 Less of a horror, more of a thriller, with a dash of faith added for flavor

Exorcism seem to be all the rage these days, what with last summer’s THE LAST EXORCISM and now THE RITE. Audiences have come to expect spewing of profanity, some splatter effects, speaking in tongues, writhing and intense sexual overtones with most exorcism films,  and the THE RITE definitely delivers some of that. Yet, the movie ultimately plays more like a thriller than a shocker and carries within it’s text a spiritual message of faith that was surprising to see in a modern horror film.

THE RITE is actually based on the book THE RITE: THE MAKING OF A MODERN EXORCIST which follows real-life Catholic exorcist priest Father Gary Thomas and illustrates various points in his journey. The movie is “inspired by true-events” so there is no really conclusive way to figure out where the original story ends and the Hollywood version starts. Still, the movie is an entertaining ride of white-knuckled tension that leaves the audience waiting for something diabolical to surface in scenes where there is actually nothing to indicate a scare.

THE RITE follows screen newcomer Colin O’Donoghue as young priest Michael Kovak. Michael is asked to go to Rome to attend the training to create a new generation of exorcists to combat the rising need for them in the body of the church. While in Rome, Michael is sent to talk to Father Lucas Trevant (Anthony Hopkins), who is a priest with over a thousand exorcisms under his belt. Through his time spent with Father Lucas, Michael starts to find his own faith which he has questioned for most of his life, and he is forced to be the champion for good when Father Lucas falls prey to the demons he has spent his life banishing to the other realms.

Directed by Mikael Hafstrom (1408), the movie is gorgeously shot. The entire composition of the picture looks too good to simply be just a horror film. The pacing is sufficient to keep the audience on the edge of their seats, and to keep the story engaging and entertaining. The psychological fear generated by the film is far worse than any sort of predictable jump scares or splatter filled scenes of gore. In fact, there is little or no blood in the movie, save for a medical emergency scene. This movie falls more under the category of thriller or suspense more so than being a straight up horror movie.

Colin O’Donoghue does a good job in his first film outing. He portrays the right level of faith vs. fact for the audience to like him as a character and to be worried about his well-being. Sir Anthony Hopkins is good, but it feels too much like so many other characters that he has done in the past. When he is good, you see the father from MEET JOE BLACK, and of course when he is bad you see Hannibal Lecter from SILENCE OF THE LAMBS. This isn’t to say that Hopkins performance is bad, it just isn’t something that soars above and beyond his somewhat standardized acting range.

This is a faith-based movie, that has the simple moral of “let go and let God.” People who put their trust in God are protected or redeemed as a result of their faith and seem to say that good “the Divine” will always triumph over evil. Maybe only in a Hollywood perfect ending world do you get to make such broad generalizations and have them end up being 100% true. In any case, it was admittedly refreshing to sit through a movie that was expected only to be a seat grabber to discover that it was a message of hope instead.

WHAT DID YOU THINK OF THE RITE? LOVE IT? HATE IT? LET US KNOW WHAT YOU THINK BY COMMENTING BELOW …