Home » Profile: Father Gary Thomas is the REAL exorcist priest behind THE RITE 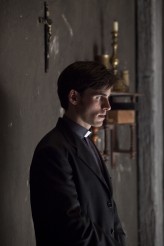 Profile: Father Gary Thomas is the REAL exorcist priest behind THE RITE

How real were the exorcism scenes in the new thriller? Father Thomas reveals the truth

Father Gary Thomas might find doing press for the film THE RITE, something of an odd occurrence. The Catholic priest is the basis for the book THE RITE: THE MAKING OF A MODERN EXORCIST , which is of course now a movie starring Anthony Hopkins and hits theaters today. Thomas the pastor at Sacred Heart Catholic Church in Saratoga, has his normal daily duties involving his parish and his parishioners, but when called to it, he also is one of the areas few practicing exorcist priests.

Facing the Hollywood press has to be far easier than what Father Thomas deals with in his regular job description. He is surprisingly laid-back, open, and very forthcoming about the details of his beliefs not only when dealing with the subject of demonic possession, but also about faith and what the age of modern technology has done to mankind. 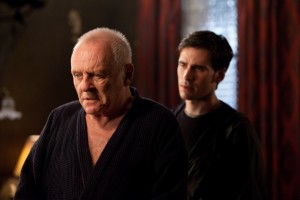 Anthony Hopkins and Colin O'Donoghue in THE RITE | ©2011 Warner Bros.TAKE 1

“I say this sometimes in my Parish, especially at funerals, I can’t prove there was a resurrection, I BELIEVE that there was a resurrection,” says Thomas. “You also have the voracity or the scriptures if you take them as truth as I do, but again it’s based on truth not fact. I think people are much more comfortable with what they know or see or what can be proven. In the milieu we live in now in the twenty-first century technology has really chunked up our need to know versus our need to believe. In times past, people were more grounded, we didn’t have all of these tools where we have information coming at us so quickly and it’s changed in a sense some of our needs.”

“This is an opinion, but I think within the DNA of every human being there is a spiritual component,” says Thomas. “It has nothing to do with denomination or belief. There is a spiritual longing in every person, and that spiritual longing has everything to do with whether or not there is a supreme being we call God or Father, Son, and Spirit. This spiritual longing comes out in the movie HEREAFTER, when a person in each of those triptychs asks if there is something beyond this life. I think that taps in to this whole question. If you believe there is a God, and you look around at the messiness of the world, you question why your belief is so twisted up with the chaos of the world around you. It gets us into the realm of the dark side of humanity. Some things about our darker side are controllable. Some are not. We die, we get sick we can’t always control that. I think we are perplexed by these questions.”

“God is more powerful than anything dark,” says Thomas. “So what I simply say to people is that they have nothing to fear. That doesn’t mean they shouldn’t be cautious, but if you really believe that God is All-Powerful, then everything else falls out below that mark. That’s what I try to reassure people with, whether it’s about exorcism or even dealing with things in their everyday lives, by simply tell them that God is more powerful than anything diabolical or demonic.”

On his own fears or misgivings about becoming an exorcist priest…

“I don’t want it to sound cocky but I wasn’t ever afraid,” says Thomas. “It has to be a Grace because I am not afraid. I don’t know why I’m just not. I’ve never doubted that there was a Satan, but until I went to Rome and worked with an exorcist, the first couple of weeks when people came in with clear manifestations – I wondered if it was the placebo effect. I’d never seen anything like that before. I had people come and visit with me about receiving visits from deceased loved ones, and I do think that can happen. I had never had anyone come talk to me about the realm of the diabolical. I was never afraid. You can’t be to be able to do this.”

“In one way or another they have been part of my experience,” says Thomas. “When Michael gets attacked in the movie by one of the possessed, that has happened, but probably not to that intensity. I didn’t have an individual with their hands around my throat. You can get physically attacked by the demon. It’s really not the person and not the demon, and it really has to be a level of diabolical attachment to allow that. When we use the word possession it refers to a human being in which a demon has fully taken over the body of a person. There are other types of diabolical which are attachments such as oppression or obsession, where there is an attachment or an intrusion, but that doesn’t mean the person can’t function. A person who is fully possessed can’t function. An integration is where a person has accepted the possession. People who come to see me are people who have gotten their toe in the water, decided this is a bad thing, and are looking for a way out. I worked on two of the four exorcism scenes in Budapest. All of those scenes are very authentic. I wouldn’t say that the scenes are ‘Hollywood-esque.’”