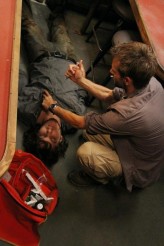 Interesting mythology and a good guest performance, but oddly similar in theme to last week’s episode

The jungle wants you to behave yourself. This seems to be the message so far of THE RIVER. Last week’s episode, “Los Ciegos,” had two regulars having epiphanies about what jerks they were being. This week’s episode, “A Better Man,” has more of the same with different characters, while one of last week’s reformed sinners, video producer Clark (Paul Blackthorne), returning to self-serving form.

In footage shot five to seven months ago, we see now-missing Dr. Emmet Cole (Bruce Greenwood) and his camera operator Jonas (Scott Michael Foster) coping with vines that are growing all over the ship and spontaneously returning whenever they are cut.

As the Magus maneuvers up the river, our crew sees Jonas’ body hanging from a tree. When they go to cut him down, he is miraculously still alive. They bring him aboard. Tess (Leslie Hope) hopes that Jonas can tell them Emmet’s whereabouts. Lincoln (Joe Anderson), with his medical background, sets about treating Jonas, who has malaria in addition to his memories. Jonas is shocked to learn that Emmet and the rest of the original Magus crew are missing and that he has been out in the jungle alone for months.

Then footage is found in the editing bay that shows Jonas and Emmet coming upon an “elder funeral” in the jungle, where a still-living tribal elder goes off alone to die. Emmet tells Jonas to respect the ceremony and not to film it, but Jonas’ ambitions get the better of him and he rolls camera in secret.

Jahel (Paulina Gaitan) is very worried. She believes that Jonas is “the Hanged Man” of folklore, someone who has angered the spirits and is cursed by hanging perpetually, in torment but never dying. Kurt (Thomas Kretschmann) knows a version of the same myth. When the Magus is beset by dead birds, then swarming insects and finally a storm, and more footage is found showing Emmet putting Jonas off the boat, Tess demands answers. Jonas says that Emmet was seeking the source of all magic (we have heard Kurt previously telling his mysterious employers that he’ll kill Emmet if Emmet has found the source). Tess, Kurt and Clark – along with Jahel – all want Jonas sent back into the jungle, even though it means he’ll be in a state of living death.Lincoln argues vehemently against it. Jonas realizes he’s putting everyone in jeopardy, tearfully apologizes and goes off to die. A vine takes him – but then releases him, still alive.

Jonas rejects Clark’s offer of a job, but accepts a beer. Tess and Lincoln find footage of Emmet addressing them, his family, straight into the camera, horrified by his own action of putting Jonas off the ship and feeling that he’ll never forgive himself.

This is two episodes in a row of characters triggering curses by their own inconsideration, then inadvertently saving themselves through true remorse. It’s a good message, but having four different people go through essentially the same arc within the span of two hours seems a bit much.

Furthermore, there aren’t any real scares this time around and the script doesn’t seem to be in touch with what it is saying. The dead parrots raining out of the sky are presumably natural denizens of the jungle who surely had nothing to do with spying on the elder funeral – why are the birds being punished? They are, furthermore, easy for the humans to avoid – everybody simply goes indoors. The bug infestation is more intrusive, but not particularly threatening once people get over their surprise.

The saving grace here is that we do get to see the group dynamic about the Magus in full swing. One of the themes of “A Better Man” is that it’s unclear to the crew exactly who is in charge, with Tess a bit too fixated, Clark too eager to get the next bit of good footage and Kurt too shifty for anyone to be comfortable with any of them. This is the most intriguing aspect here. There’s also a good dose of unexpected humor. Guest actor Foster is a good brash young lead type, and Aron Eli Coleite’s script gives him some amusing stories and observations to recount.

THE RIVER is still intriguing and has strong mythology, but with only four episodes to go, it seems time for it to pick up speed.