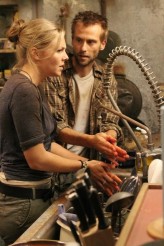 A slight overdose of character-changing heroism

Too much character development is normally not a complaint for an episode of a TV series – the problem is usually the reverse. “Complaint” and “problem” are perhaps words too strong for what happens in THE RIVER’s third episode “Los Ciegos,” but it starts feeling like a bit of overkill when both of the show’s main cynics have changes of heart that would do credit to Ebenezer Scrooge, and another character has an epiphany about family.

In “Los Ciegos,” the Magus docks by a part of the jungle that seems to match photos that Emmet (Bruce Greenwood) left behind. Jahel (Paulina Gaitan) warns that this area is the home of the Morcegos warrior tribe. According to legend, the Morcegos judge all visitors to their realm, and those deemed unworthy of seeing the jungle do not leave it alive.

In the morning, everyone is inclined to take Jahel’s store seriously, as strange eye symbols have been left outside the tents. An expedition into a cave leads to the discovery of a dead Peace Corps worker with his eyes cut out. It also leads everybody getting sprayed with bat guano, save cameraman A.J. (Shaun Parkes), who was trapped in a mine years ago and now won’t go underground for anything.

Then Emilio (Daniel Zacapa) is stricken with blindness, followed by Tess (Leslie Hope). Video producer Clark (Paul Blackthorne) goes to private security man Kurt (Thomas Kretschmann) and says he knows that Kurt has a phone that actually gets reception out here in the middle of nowhere.Clark doesn’t care who Kurt is secretly talking to with the phone, but he wants Kurt to use it to get some medical help out here.

Clark is soon blind as well. He talks to Tess of his love for her. Tess, aware of the cameras recording everything, tells Clark she wants these tapes erased, unaware that her son Lincoln (Joe Anderson) has overheard them. In what appears to be an accident – but perhaps isn’t – Kurt stabs Clark in the stomach.Lincoln uses his medical skills to stitch up the wound, butClark’s survival is far from certain.

Lena believes that the blindness is caused by a toxin called Ciegos that is used by the Morcegos. Emmet used to say that everything in nature has its opposite, so Lena thinks that the bulb of a certain tree may cure the blindness. She, Kurt and A.J. leave the ship to search for the bulb.

With Lincoln pressing for the truth, Clark tells Emmet and Tess’ son that Emmet left Tess for this final expedition before Clark and Tess became involved. Tess had already decided to leave Emmet for putting his work first always.

When Lena and Kurt go blind, A.J. has had enough. He leaves the two disabled people to cope by themselves and heads off on his own, hoping to find civilization. Instead, he finds the tree they’ve been searching for. The bulb grows literally under the tree, among the roots. A.J. persuades himself to go down into a gap under the tree, gets the bulb – and then the hole caves in around him. A.J. talks to his still-running camera, telling his father that he loves him.

The ship is under attack by the Morcegos. Blind and in terrible pain, Clark gets up from his sickbed to draw the Morcegos’ fire, calling out that he is the one to blame for this invasion of their territory, he bullied the others into coming out here, he’s at fault.

The Morcegos suddenly disappear off the boat. A.J. is mysteriously rescued from beneath the tree and even has the bulb he sought. Right before A.J. returns, Kurt whispers into his cell phone, asking his unknown handlers for an extraction, but then the cameraman shows up with the blindness cure.

On the Magus, everyone recovers their sight. Clark is now willing to head home, but Tess insists she wants to press onward – to Clark’s disappointment, Tess wants her family back, meaning she wants to return to Emmet.

The episode is certainly fun in terms of letting actors Blackthorne and Parkes go through a gamut of attitudes and emotions, going from appalling to selfless. They both do a fine job, but having both characters enact what is essentially the same personal arc within the same episode feels like a little too much, too soon.

Despite the fact that the Morcegos are largely kept off-screen, they don’t have the same menace as the evil spirits in the first two episodes, perhaps because, given the episode’s climax, there’s only so hostile they can really be. The whole business of Emmet choosing the Amazon over his family is stated a little more explicitly here, but we’ve gotten the picture on this aspect of the story already.

The plot point that moves the story forward the most is Kurt talking to his handlers, and physically lashing out (probably intentionally) at Clark once Clark indicates he knows Kurt has some sort of arrangement outside of the expedition. This is perhaps the creepiest element of “Los Ciegos.”

THE RIVER is still enjoyable and entertaining, but “Los Ciegos” feels a little bit like filler to keep the story going until the next big scare.