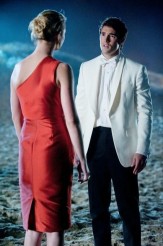 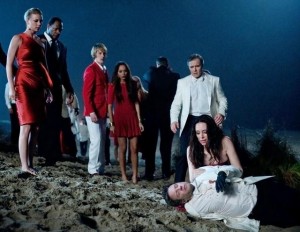 The episode “Chaos” is perhaps the most aptly titled episode of REVENGE yet – there is so much going on, and it all ties into what we all came here to see, namely the shooting at the beginning of the season, which also starts the episode. And, oh, yes, there is one humdinger of a surprise twist at the end. More cynical minds might suggest we could have seen this coming. I totally did not.

Quick recap, when we last left the gang in the Hamptons, Charlotte (Christa B. Allen) was drowning her sorrows after finding out that Conrad Grayson (Henry Czerny) is not her birth father and Emily (Emily VanCamp) had just discovered that her box containing the evidence for her father’s innocence and against the Graysons for setting him had been stolen.

And guess who stole it? That bad boy Tyler (Aston Holmes). Everyone’s favorite psycho is back. And not only has he got Emily’s box, he’s kidnapped Amanda (Margarita Levieva) and now knows the truth about both her and Emily and Emily’s revenge plan.

Jack (Nick Wechsler) is still bummed about Amanda and decides to go to Haiti to build a school, and Daniel (Josh Bowman) is still steamed about his mother lying to him about David Clarke (the wronged father of the real Amanda Clarke, aka Emily Thorne). Enter Grandpa Edward Grayson, who is still worried about the effects on the family name, and so he’s pressuring Daniel to take his father’s place and pressuring Charlotte to keep the family secret about her parentage. Conrad, for his part, has agreed to terms for the divorce from Victoria (Madeleine Stowe). And all of this is leading up to the big Fire and Ice ball to celebrate Daniel’s and Emily’s engagement, where we know that Daniel is going to get shot.

Tyler calls Emily to let her know that he has Amanda and the box and demands money. But it isn’t about the money – it’s about his own revenge. So he turns Amanda against Emily. Emily goes to the meeting with Tyler and gets the jump on him, but Amanda gets the jump on Emily.

Enter Mr. Santoshi (Hiroyuki Sanada), Emily’s secret mentor. Grandpa Edward sends Daniel to reassure Santoshi that Grayson Global is stable in spite of the divorce, but instead Daniel tells Santoshi that he is dropping out and eloping that very night right after the big party. Jack gets ready to leave, dropping Sammy the dog off with Emily, but just as he’s getting on the boat, Amanda shows up and he takes her in. Sort of.

The big ball is in full swing as Conrad and Victoria sign their divorce papers and Conrad leaves with Victoria fondling a business card from an investigator for the Securities and Exchange Commission. Victoria and Daniel square off, with Daniel telling her that he and Emily are going to leave for Paris that very night. The problem is, he hasn’t told Emily yet and when he does, Emily says they can’t – which is exactly what Victoria predicted she would do.

Then we see Declan (Connor Paolo) and Charlotte taking off for the surf in their undies, we hear the shots and….

Big twist and since this is a No Spoiler Zone, not gonna say what it is.

More importantly, though, there is a tremendous amount going on in this episode of REVENGE.  We’ve got all of the different storylines in the series being serviced almost at once, yet they all tie together beautifully. The episode feels all of one piece and even though we are left with one whopping mystery at the end, it still feels satisfying and as though we’ve gotten some of the answers to the questions the pilot left us with. Now, the only problem is that we’ve got to wait two weeks before the next episode.