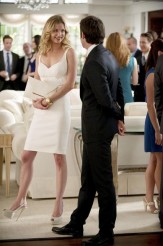 Lydia's getting suspicious, Victoria already was, and Emily knows Amanda is up to no good

Maybe it’s because this aired on the night before Thanksgiving and some of us were a little distracted, but “Suspicion” was a rather flat episode for REVENGE.

It felt like things were being set up, but not much was actually happening. Emily Thorne (Emily VanCamp) is trying to control her counterpart Amanda (Margarita Levieva), who in turn is going after local pub owner Jack Porter (Nick Wechsler). And this could cause significant problems for Emily’s great plot to exact revenge on those who were behind her father’s conviction for a crime he did not commit. We still don’t know what that crime was – it seems to have involved a plane crash.

In any case, Victoria and Conrad Grayson (Madeleine Stowe and Henry Czerny) are the targets of Emily’s plot, but there are complications because Emily is apparently in love with their son Daniel (Josh Bowman). Because it’s Emily, who knows if she’s really in love or not. Then there’s also the complication with Lydia (Amber Valletta), who was Emily’s first target, is Conrad’s mistress and Victoria’s former best friend. Lydia is the one who survived the five-story fall, only to be taken in by Victoria. Only Lydia does not trust Victoria, so Conrad took her home.

Tyler (Aston Holmes) is still up to his slimy little tricks, this time trying to turn Victoria’s assistant Ashley Davenport (Ashley Madekwe) against Victoria and trying to usurp Daniel as heir apparent to the family business.

Finally, Jack’s younger brother Declan (Connor Paolo) is getting closer to Victoria’s daughter Charlotte (Christa B. Allen), who is in full-0n adolescent rebellion. Victoria tries to intervene, but it doesn’t seem to be working. Hmm.

So overall, there were a lot of different story lines serviced, but nothing really of substance seems to have happened.