It's a perfect 25th anniversary celebration for the Graysons - everyone is mad at each other. 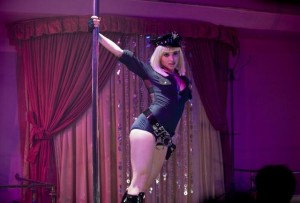 As I noted elsewhere recently, one of the problems with these endlessly mysterious kinds of shows like REVENGE, where for every question that gets answered, three more pop up, is that it can be a little hard to tell if the writers are just being mysterious or if they simply screwed up. And it’s really hard in the re-telling of this show not to sound cynical because it is so very, well, soapy.

But that doesn’t mean it isn’t fun to watch – REVENGE is a total guilty pleasure. It’s just that when you’re thinking about it afterwards, you start to realize things.

Such as in “Charade” when Emily Thorne (Emily Van Camp) tells her accomplice Nolan (Gabriel Mann) that Daniel Grayson (Josh Bowman) is not a target in her ongoing machinations to bring down Daniel’s family in revenge for them setting up her father for a heinous crime that he didn’t commit. But then there’s this little shot near the end of this episode where a close-up on Emily’s hand suggests that maybe she isn’t as in love with Daniel as he thinks. So is this part of the mystery or a goof?

The bulk of the episode revolves around Victoria (Madeleine Stowe) and Conrad (Henry Czerny) Grayson’s 25th wedding anniversary, with the local reporter doing the usual happy profile on the couple and Daniel’s so-called buddy Tyler (guest star Ashton Holmes) still trying to cause trouble for Emily.

Tyler acts like he’s coming clean – at least he tells a similar story to both Nolan and Victoria’s assistant Ashley (Ashley Madekwe). But this is a man who lies routinely and as easily as breathing. So either he’s got something going on or the writers…. You get the picture.

And in the meantime, former bodyguard Frank (Max Martini) is determined to find out everything about Emily – and does turn up a surprise – the real Emily Thorne, who is now going by our Emily’s former name, Amanda Clarke. Oh, and Lydia (Amber Valleta) might actually wake up from her coma from when Frank all but tossed her from a five-story building.

Again, the show is deliciously fun to watch, and this episode was quite satisfying in that respect, but then you realize this doesn’t make sense. Or does it?