Home » Interview: Madeleine Stowe gets a taste of REVENGE

Interview: Madeleine Stowe gets a taste of REVENGE 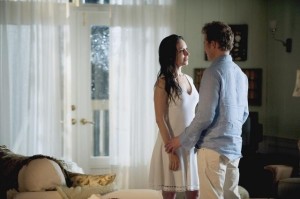 In ABC’s new hit series REVENGE, Wednesdays at 10 PM, Emily VanCamp plays Emily Thorne, who returns under an assumed identity to the upscale community in the Hamptons where she lived as a child.

Emily’s goal is to get revenge (see the title) on the people who sent her beloved father to jail for life and ruined her younger years. There’s plenty of collateral damage, but Emily’s principal target is Madeleine Stowe’s character Victoria Grayson, who rules the enclave as its unofficially anointed queen.

Stowe, a Los Angeles native, had audiences swooning as the heroine in LAST OF THE MOHICANS. Her many other film credits include TWELVE MONKEYS and BLINK. She was last a series regular on RAINES with Jeff Goldblum. However, Stowe says Victoria is unique among the women she’s portrayed.

ASSIGNMENT X: You’ve played a lot of people who are very determined, but not at Victoria’s level of personal power. Were you looking to play this sort of character, with a great wardrobe and a very reserved manner, where we see all the wheels turning underneath?

MADELEINE STOWE: It’s not even something that I ever consciously thought about. It wasn’t part of my calculations. It truly came out of the fact that I had kind of left [acting] things for awhile, because I was so focused on this film that I’m going to direct that it consumed all my energy. My agent kept saying, “There’s this, there’s this, there’s this.” I said, “I just can’t, I can’t get over [to where the project is being made].” And then I thought, “Well, here this is, and it would be kind of interesting.” Particularly being the age that I’m at right now, when women aren’t allowed to be glamorous creatures. And this is a supremely powerful character, [whose power] starts coming out more and more and more.

AX: We know Victoria has done some terrible things, and yet she’s somewhat sympathetic …

STOWE: Initially, it was tricky finding the right balance, because some people thought that she should be almost a moustache-twirling heavy, and I never felt that. I felt that she had a certain kind of vulnerability about her, that if the hammer had to come down, it was going to come down. So when they were testing it, I think what they found is that the audiences unexpectedly felt for the character, felt a lot of sympathy for her. Because she’s trapped. 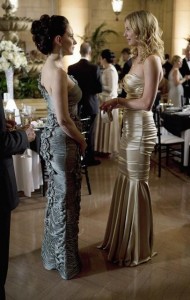 AX: Do you feel like REVENGE overall plays into the sentiments of some sectors of the public right now, showing wealthy people abusing their power and being punished for that abuse?

STOWE: Yeah. We all know that we’re headed for very interesting times. I don’t know where our country’s going to be a year from now, but I think to observe these over-privileged people who have everything at their fingertips and at their beck and call and now they’re being pulled down and given a comeuppance, might be some sort of vicarious thrill for [some] audiences. Everything about this – the disparity is so huge right now in terms of who’s making the money and, “There’s this [group of wealthy people], and there’s everybody else.” And I think everyone is feeling their lives starting to slip, so to be able to turn on to this for one hour and see this sort of escapist fantasy, which has a really dark heart, I think could be satisfying. There’s almost an UPSTAIRS, DOWNSTAIRS quality to it, too, because there’s Jack [Nick Wechsler] and the boat and his family, these working-class people, who are retaining their integrity.

AX: When you’re on set, do you drop character between takes, or do you try to stay in character?

STOWE: I actually like to stand in for myself [as the lights are being set – this is typically the job of a lighting double, or “stand-in”]. I like to stand in for my character and be there every second, so I can really go in. That’s not how people typically work, and with her, it’s sort of essential. What I do find is that my own mind is rising to a level of paranoia in certain areas, certainly in conversation with somebody, and I start to think of people’s motives behind what they’re doing more. Which I do a lot anyway. 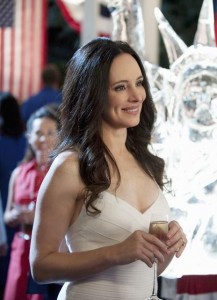 AX: Is part of you wanting to be on set every second because you’re learning from the director about what you’ll be doing when you’re directing your film, watching how they light and how they choose their shots?

STOWE: I’ve worked with a lot of great directors and I’ve learned a lot from them, from Michael Mann to Robert Altman to Terry Gilliam, Tony Scott, a lot of terrific people. So that’s always sort of filtered in. That’s not what I’m feeling. I’m really concentrating on this character. I’m surprisingly loving it, because I’ll say to [series creator] Mike [Kelley], if there’s something I feel that’s missing, I’ll say, “Don’t you see what she’s thinking here? She’s thinking this because this is happening.” And in comes a line that all of a sudden leads to something else, another dimension, another layer. So the potential for the show – I’m just speaking off the cuff – the potential for the show is to go really, really deep and psychological in a Hitchcockian way, if they choose to do that.

AX: When are you shooting your film?

STOWE: This is going to be really hard. [Because] the back nine [have been] picked up, I will literally have a window where we all have to fall in [to be available] at the same time. If not, it will have to wait ‘til next year, because we’ve got to deal with other issues. We have to shoot in Saskatchewan, Canada. It’s a really interesting part of history, 1859 to 1867. I have to say, [the premise] has never been done in a Western . John Toll is my cinematographer. He did LEGENDS OF THE FALL, and Charles Roven who does DARK KNIGHT is my producer, and I’ve got this remarkable crew.