Finally, after weeks of auditions and narrowing the number of contestants down to 17, we get the live performances on THE X FACTOR.

Now, we just gotta eliminate another five in order to get to the Top 12. Top 12 eh? Where have I heard that before? Oh, yeah that’s right AMERICAN IDOL does the exact same thing, unfortunately just as slow as this show has as well. It would have been much better to just have jumped to this point, but I guess whatever sells.

So, let’s get to the performances 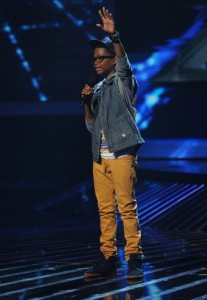 Astro – Kriss Kross really? That’s what you choose to perform in what has to be one of the biggest moments of your life? To me, that’s a bad choice … now granted his singing skills aren’t the best in the whole world so he’s already relying on his performance but I guess I would have picked something more modern. The judges didn’t really feel the same way I have, instead they loved it and said he should be a shoe-in for the finale.

Chris Rene – This is the dude if you remember had all the issues with drugs that he admitted to at the beginning of the show. I enjoyed his own stuff better than what he did in his live performance but it was still OK and he’s got an interesting look that will play well with the female contingent watching. So that’s always something to consider. And after the really loud performance from Astro, this was a bit of a downer.

Philip Lomax – Oh boy, who picked this song for him? Terrible choice. The Monkees isn’t exactly what I think of when I want to pick the next big thing in music. Just a total Las Vegas performance. Scratch that. Reno performance. So far, he’s the one getting cut. Not sure what the judges are seeing in this dude because it was just corny.

Marcus Canty – OK, who’s picking these songs. Is it L.A. Reid? Because if it is, he needs a buffer between his own choices and what really should be picked. Culture Club, are you kidding me? This just was wrong on so many levels. The dude can obviously sing and I feel for him because you could almost tell that he didn’t want to be singing that song. He’s got talent so he should definitely be the one going to the next stage in the competition, but what the heck is with the song choices?

L.A. chooses his boys that will be going into the Top 12: Astro, Marcus Canty and Chris Rene are sent through to the next round. Not a shocker at all that Philip Lomax is eliminated. 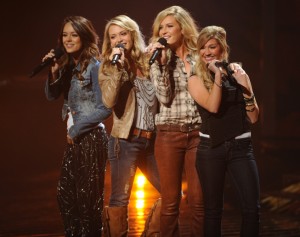 The Stereo Hogzz – I like that there will be at least three groups in the Top 12, that gives this show at least one differentiation between some of the other talent competitions out there. Not sure how far these guys will go if they make it through to the next round but you can tell that they have some talent for sure. This didn’t really show off much of a “group” performance more than just one dude singing with a bunch of other guys backing him up, but maybe they can do something different in future episodes if they make it.

The Brewer Boys – Not sure if this is the best thing to follow up The Stereo Hogzz and obviously someone has the royalties to Culture Club as this was the second song from the band in six performances. They are different and that might be enough for them to get a shot in the Top 12 and you can guarantee they will be a teen girl bonanza if they go throug, but I question the song choice yet again.

Intensity – This group is a shoe-in to make it, right? Given that they are a mish-mash of all the rejects that couldn’t make it as single performers makes it a given they are going on. Or does it? You can tell that there is a reason that they were combined because their singing skills are not really as polished or, uh, good as the others. Yeah, it is a cute story that they are all together but does a whole crapload of mediocre singers trump those that can actually sing well? We’ll see soon I guess. By the way, did Fox suggest this as a promo for GLEE? Because this is exactly like a high school Glee club (and the show) – crappy but snappy.

Lakoda Rayne – Anyone else laugh at the fact that four hot chicks are singing “Come on Eileen?” I mean, they do know what this song is about, right? Probably not. The country twist was interesting for sure and they are definite eye candy for the competition, but without that whole teen contingent getting behind them (and no teen girl is gonna support hot chicks), they won’t last long.

Paula (what was the over/under on her crying?) then decides who gets to move on and who gets cut: The Stereo Hogzz, Lakoda Rayne and Intensity make it to the Top 12. The Brewer Boys get cut. 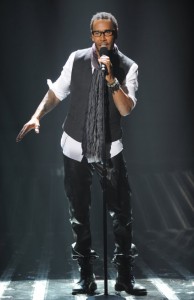 Dexter Haygood – Cocaine is a hell of a drug. I could go on but you get the idea and the Rick James vibe I’m feeling. Actually, this was the first performance I actually have enjoyed the entire night so far. Never have I heard Katy Perry sound so interesting. This guy is all rock and roll and little or no singing talent. He’s fun. I hope he moves on.

Leroy Bell – The whole over-30 category is gonna be a tough nut to crack for some of these other contestants because most of them have the experience and the talent that will carry them far if the audience actually votes on pure talent. Leroy proved it with his slow ballad but a song that was really done well. If the last two are this good, they should really send one of these other losers home and keep all four.

Stacey Francis – Stacey was the one that blew the lid off the place when she auditioned and broke down crying. Not sure if I would have chosen this song for her, but it definitely was something that showcased her huge voice and talent, so in that respect it is good but when it comes to the viewers voting I would imagine she’s gonna have to make it more upbeat and modern to survive. Nicole has a touch choice ahead of her.

Josh Krajcik – OK, why Nicole of all people chose all these slow songs (except for Dexter) is beyond me. Yeah, it shows off their voices really well but in what might be the first time anyone is watching these performances (if they skipped the audition rounds which a lot of people do) you need to wow them. This was a great singing performance but just a bit sleepy. He’ll need to amp it up if he makes it.

Nicole then decides who moves on in the competition: Stacey Francis, Josh Krajcik and Leroy Bell move on into the Top 12. Dexter Haygood is eliminated. Yeah, they definitely should have put through all four and got rid of one more of the boys. 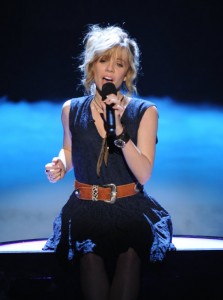 Simone Battle – Simone if you remember was the one that Simon personally loved because she was a unique talent so he thought and L.A. didn’t like at all. Again, what a poor song choice. Not sure why anyone would choose to sing this song in a talent competition as it really doesn’t show any, well, talent. And I love the booty cam there during the song, it was pretty sweet. Still, unless Simon sees something the rest of us don’t, she doesn’t seem to have the talent compared to others we have seen so far tonight. I totally agreed with L.A. on this one.

Rachel Crow – Haha did you see Simon’s face as Rachel started singing this song. It was almost one of those, “Oh, hell, what did I do choosing this person.” I agree. What the hell were you thinking? Look, I know that you are trying to prove a point that anyone can be the next big thing even a 14-year-old but come on at some point you put Rachel up against Dexter Haygood that got eliminated and you gotta say, huh? No way. Maybe in a few years Rachel would rock it out, but not right now, sorry.

Drew – Now, take this 14-year-old and you have something. She obviously has so much more talent than the one we saw just prior to this performance. And given her young age it is pretty amazing she can sing as well with so much control. Now, again, the ballad choice may work when the judges are determining who will move along, but in the main competition I just think something more upbeat will do a lot more good. She definitely is moving on.

Tiah Tolliver – Tiah you may also remember as the sammich girl that no one really liked except for Simon and he pushed so hard that the others decided to give her a shot. Well, I don’t know what was going on with the whole PHANTOM OF THE OPERA stage thing that was going on but it was definitely an interesting performance. If they are looking for an Adam Lambert-type that can make a splash and get some buzz, Tiah is definitely the one to go with. But if this is about finding the best singer, there was just way too much happening on stage to really focus on the main point, which was the singing.

Melanie Amaro – Following that last performance is a tough job considering there was just so much going on beyond just the singing. So, what happened? We got one of the best performances of the night in which Melanie came out and blew it out with some impressive pipes and most important just her on stage by herself belting it out as maybe it should be. If Simon chooses one of these other chicks instead of Melanie it is a crime against singers.

Simon then had to choose who moved along to the next round: Drew, Rachel Crow and Melanie Amaro. Tiah Tolliver and Simone Battle are eliminated. At least Simon listened to some of the others and the audience and probably chose the right girls.