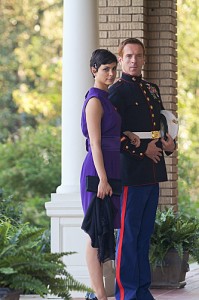 In Showtime’s new series HOMELAND, already renewed for another year, Damian Lewis plays Marine Sgt. Nicholas Brody, who was presumed dead but was rescued after eight years of captivity and torture in the Middle East. The CIA wonders if Brody has been turned into a sleeper agent, but his family – wife Jessica, played by Morena Baccarin, and their two children – are more concerned about simply reintegrating him into his home.

Born in Rio de Janeiro and raised in New York, Baccarin has played all sorts of characters, but until now, she’s been best known for her work in the science-fiction genre: the space-traveling Companion Inara Serra in FIREFLY and SERENITY, the alien Adria in STARGATE: SG-1 and Visitor leader Anna in two seasons of V. Jessica Brody gives Baccarin the opportunity to play someone who is literally more down to Earth, even though the character is involved from the outset in some extremely dramatic situations.

ASSIGNMENT X: How did you become involved in HOMELAND?

MORENA BACCARIN: I had met with [Showtime executive] David Nevins before, for other project,s and tested for things when he was at Imagine, and had a relationship with [casting director] Amy Britt, who is head of casting at Showtime, who cast me on FIREFLY. Just in talks with everybody, this was something that we all felt about that I should go after, and so I auditioned for it and was lucky enough to get it.

AX: Howard Gordon and Alex Gansa, who adapted HOMELAND for American television and who are the show runners, hail from 24. Had you watched 24?

BACCARIN: Yes. It’s a great show. I didn’t watch it consistently all the years that it was on, but it was a great show and I thought it was great. [Gordon and Gansa are] an incredible team to be a part of.

AX: Tell us about your HOMELAND character.

BACCARIN: I play Jessica Brody, the wife of Sergeant Nicholas Brody, who goes missing in Afghanistan, and he becomes a P.O.W. for eight years. And at that point, I assume he’s dead and I sort of move on and start sleeping with his best friend, Mike Faber [Diego Klattenhoff], who’s also a Marine. And then Brody is found. He comes back. And then there’s the readjustment and the home life, just trying to find his way again.

AX: Are you happy to be playing a normal human in the present day?

BACCARIN: Not that I didn’t love playing Anna, but I am really ecstatic to have feelings again [laughs].

AX: And working on a set that’s entirely there, as opposed to the CGI in V.

BACCARIN: Yes, a set that’s entirely there. I don’t have to be concerned with eradicating human emotions [laughs]. It’s really great.

AX: From what you’re saying, it sounds like Jessica has quite a few emotions.

BACCARIN: Yes. It’s very layered and there’s a lot going on for my character, which is really what attracted me to this role.

AX: The CIA character Carrie, played by Claire Danes, believes that Nicholas Brody is secretly a terrorist, a sleeper agent. Does Jessica have any similar suspicions?

BACCARIN: No. My character has no idea. I’m living in oblivion to that. I’m just focused on our home life and our kids and how to get that back together and patch it up again.

AX: Do you think Jessica is torn between her husband Nicholas and her lover Mike, or does she have a preference for one over the other?

BACCARIN: Well, she’s made a decision to make her marriage work and that’s her priority, so I don’t think she’s allowing herself to feel one thing for one guy and another thing for another.

AX: Is Jessica the first character you’ve played who is a mother? Well, Anna the Visitor is technically a mother …

AX: But as far as playing the human mother of minor children …

AX: Where does HOMELAND shoot?

AX: How is it working there as opposed to working in Los Angeles or Vancouver?

AX: Do you have a favorite aspect of playing Jessica?

BACCARIN: I really connect with the emotional journey that this woman is going through, the relationship to the husband who is missing, to the man she fell in love with and had to give up when he came back and to the children who grew up without a father.

AX: Have you done any other work recently that we should be on the lookout for?

BACCARIN:. No – there hasn’t been time! [laughs] We ended V in April and I jumped right into this.

AX: Were you happy with the way V ended?

BACCARIN: I was. I was sad, of course, that it was over and that we didn’t get to play out the full story – I wanted to know what was going to happen – but I had a great time playing that character and it allowed me to just really have fun in a role that was so out there, and I’m very grateful for that.