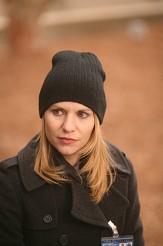 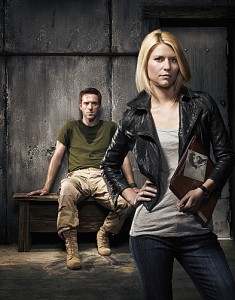 In Showtime’s new series HOMELAND, which airs Sundays at 10 PM, Claire Danes plays CIA officer Carrie Anderson, who is convinced that returning war hero Marine Sgt. Nicholas Brody, held as a POW for eight years in Iraq, has actually been turned and is now a sleeper agent planning a terrorist act on U.S. soil.

Fresh off her Emmy win for playing the real-person title character in HBO’s TEMPLE GRANDIN, The New York-born and raised Danes is making her first foray into series television since her 1994-1995 run in the short-lived but still venerated MY SO-CALLED LIFE.

She’s done theatre (notably the 2007 Broadway revival of PYGMALION) and a lot of films (including ROMEO + JULIET, TERMINATOR 3: RISE OF THE MACHINES, STAGE BEAUTY and STARDUST) in the interim, but she’s clearly delighted to be back on the small screen – especially in premium cable, for the following reasons. “I think there’s just so much liberty that one has in cable. You get to curse a lot. You get to get naked a lot. I think that’s more appealing than the relatively moderate work hours [compared to network television]. It’s just [more] creative flexibility.”

Danes also thinks that television may be a better place for topical drama than theatrical films at this point in time. “It’s a great, incredibly valid question,” she adds. “I don’t think I have the answer to that, but it is true that I have not read a character this compelling in a movie script in quite some time. I just gravitate to the most interesting work, and this was just impossible to ignore.”

Danes elaborates on her HOMELAND experience in the following exclusive conversation.

ASSIGNMENT X: How did you come to be involved in this project? Were you specifically looking to do a series at this point in time?

CLAIRE DANES: No, I didn’t have a clear opinion either way. They approached me about it and I was really excited by the pilot [script] and the character, and I thought it would make for very exciting television, so I said yes.

AX: Is this your first time playing someone who is in law enforcement, broadly speaking?

AX: Have you had to do any research to play someone who works in Homeland Security?

DANES: A lot, yes. I had to [research Homeland Security officials] and what they do about terrorists. So I’ve been reading books on those subjects since July.

AX: Is there anything different in playing somebody in that type of position than in playing other characters?

DANES: Well, she’s authoritative, and there’s some funny [Homeland Security] language that is not necessarily familiar to me. It can be kind of tongue-twisters, but no. She’s a boss. She’s not the boss, there are people above her, but she has to give orders in a very comfortable way. 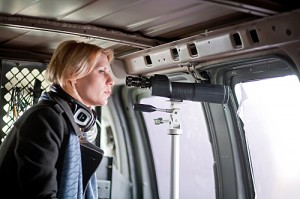 AX: Your HOMELAND character Carrie Anderson seems pretty much as different from Temple Grandin as a part could be, given that Carrie is in a position of such authority and has to evaluate little clues about human behavior, while Temple Grandin is autistic and has become an expert on handling cattle.

DANES: Well, not really, no [in terms of the extent of the differences]. The idea is that [Carrie is] bipolar, but she sees the world from a unique vantage point and she’s hyper-vigilant.

AX: HOMELAND was adapted from the Israeli series HATUFIM, created by Gideon Raff, by Howard Gordon and Alex Gansa, who spent many years as producers/writers on 24. Were you a fan of 24 and/or this genre before you got this role?

DANES: I’ve never actually seen 24, but I’m a fan of [Gordon and Gansa]. They created our show and I’m loving working with them.

DANES: I like that she’s smart in an analytical way and she’s also intuitive and I like that she’s incredibly formidable and strong and also vulnerable. These seem like snap, clichéd answers, but it’s actually true of her.