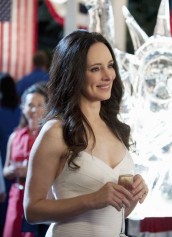 Frank Gets Fired Over Lydia's Fall, Jack Makes His Move on Emily, and Just What is That Dweeb Tyler Up To?

First off, let me make a correction to last week’s episode, it turns out that when Lydia took that fall off her rooftop after fighting with the Grayson family bodyguard/hit man Frank (Max Martini), she survived. She’s in a coma, but alive. Whodathunk that?

And Nolan (Gabriel Mann) does point out to Emily (Emily Van Camp) that it was kind of her fault. See, Emily had set it up so that it looked like Lydia was causing all the nasty things to happen to the Graysons – the evil couple who caused Emily’s father to be convicted of a crime he didn’t commit. Of course, we don’t know what that crime was, just that David Clarke spent the rest of his life in jail for it. In any case, Emily is committed to exacting her revenge on everybody who had anything to do with it.

Since the spy cam that caught Frank beating up on Lydia was, in fact, Nolan’s and he did retrieve it, Nolan shows Emily what happened that night. And naturally, Emily knows just what to do with the video – send it to Conrad Grayson (Henry Czerny), who promptly fires Frank. The problem is that Frank has feelings for Victoria Grayson (Madeleine Stowe), who may or may not return them. And Frank isn’t going to let go that easily.

On the relationship front, Emily and Daniel Grayson (Josh Bowman) are living in happy new relationship land for the time being, never mind that Daniel’s father has cut him off and Daniel has a new job at the Stowaway, the bar owned by Daniel’s rival for Emily’s affections, Jack Porter (Nick Wechsler). Nolan tells Jack to make his move on her.

And then there’s Tyler (Asthon Holmes), the skanky little dweeb who seems to have made it his business to worm his way into the Grayson family affections and split up Emily and Daniel. Lying readily and easily, Tyler may have deeper feelings for Daniel than mere friendship, which would explain a lot. But like so much on this show, it’s not clear what his real agenda is, just that it’s there.

All of this, by the way, is set against on the Fourth of July, with the party as the backdrop for Jack’s big confession.

For some reason, the episode, as a whole, fell rather flat. Not sure why. Certainly, there’s plenty of intrigue there, including Frank catching on to far more than he should. But it feels more like a set up for next week’s episode than a full-on episode by itself.

Still, this is guilty pleasure viewing with a hey nonny.