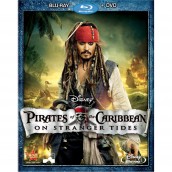 There was a lot of ire from fans this summer when PIRATES OF THE CARIBBEAN: ON STRANGER TIDES was released. Many people absolutely hates the fourth installment of the venerable franchise featuring quirky pirate Jack Sparrow (Johnny Depp).

Yet, I didn’t understand what all the fuss was about. I thoroughly enjoyed ON STRANGER TIDES, which brought the series back to the streamlined fun of the original THE CURSE OF THE BLACK PEARL and torpedoed a lot of the silliness (and confusion) of the back-to-back follow-ups DEAD MAN’S CHEST and AT WORLD’S END.

Part of the reason why ON STRANGER TIDES works so well is the absence of the first three films’ co-leads Elizabeth Swann (Keira Knightley) and Will Turner (Orlando Bloom). Their story had run its course, and it felt like extra baggage in the last two films, when you really just wanted more Jack Sparrow.

Now we have it, as ON STRANGER TIDES focuses on Sparrow butting heads with former love Anjelica Teach (Penelope Cruz) who is just as ruthless and unpredictable as he is. She, along with Blackbeard (Ian McShayne) are searching for the Fountain of Youth. The adventure brings back old frenemies like Captain Barbossa (Geoffrey Rush) while also bringing in new characters too including some pretty vicious mermaids.

The story is solid and moves at a fast clip with new helmer Rob Marshall bringing the same sense of style, whimsy and wonder that Gore Verbinski brought to the previous three installments.

If there is any major criticism, it’s bringing in a love interest for Sparrow. While it’s nice to see a different side to the pirate, the love story was one of the weakest things in the last two movies with Elizabeth/Will, so to see it played out with a character who works better when he’s gone rogue, it is a small knock on an otherwise very cool film.

The 2-disc combo pack is loaded with special features. You not only get the Blu-ray and DVD in the package, but you also get the exceptional Disney Second Screen feature where you can explore additional content on your iPad or computer while watching the movie.

There’s a perfunctory commentary with Marshall and executive producer John DeLuca, but really, they should have pushed to get Depp to do commentary. They’re paying a butt-load of money to Depp to star in these movies, and to have the guy talking about his adventures shooting PIRATES would have been priceless (and a nice bonus).

It’s rare to get bloopers on a film like this, but there’s a nice little reel for fans. It’s a little over three minutes, but it’s fun to see the actors (particularly Depp) break character.

There’s also some animated LEGO shorts dubbed CAPTAIN JACK’S BRICK TALES which is a tie-in to this summer’s LEGO PIRATES OF THE CARIBBEAN video game. They’re really terrible, utilizing the cut scenes from the game with some annoying narration. They might have worked online as little teases to the game, but as a bonus feature, it’s a total dud.

What’s lacking here are documentaries on the making of the film and other special goodies. Perhaps they’re holding on to all of that for a super special edition. However, it would have been nice to include some of that now.

The lack of significant special features is a downer, but the movie itself is solid. In fact, it’s far more enjoyable without the 3D enhancement that was thrown on to the theatrical release (although, if you have 3D TV’s a limited edition set includes a version of that as well).

PIRATES OF THE CARIBBEAN: ON STRANGER TIDES has found a way to keep the franchise alive and move it forward to the already prosed fifth film. As long as they keep this lean, mean storytelling from this installment into the next chapter, it should be another great ride.