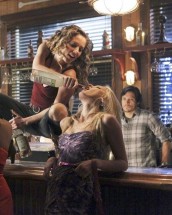 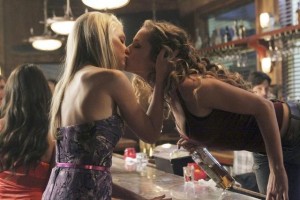 One of the issues of writing about REVENGE is that we have two characters who have switched names, and in “Infamy,” this becomes an issue. So to minimize confusion, please remember that since Emily Thorne (Emily VanCamp) is usually referred to as Emily even though she is really Amanda Clarke, she will be referred to as Emily throughout. The real Emily Thorne is currently in place as Amanda Clarke (Margarita Levieva), so that’s to whom we’re referring when we talk about Amanda.

The plot thickens when Daniel Grayson (Josh Bowman) suggests that Emily move in with him, and Emily doesn’t quite want to unless they’re married. Daniel gets even more incentive to make that particular commitment when his attempt to get his shares of the family corporation released to him in an effort to protect his mother Victoria (Madeleine Stowe) from losing her share of power in the increasingly ugly divorce proceedings with Conrad (Henry Czerny).

Add to that the return of author Mason Treadwell (Roger Bart), who wrote the book on the crime that David Clarke was innocently accused of. Turns out Victoria has her hooks but good into Treadwell, so he ended up writing the Grayson version of Clarke’s supposed involvement in the downing of a plane. The problem is, he interviewed Emily as a little girl. Emily had been forced to say that her dad was guilty, then in comes this author Treadwell, who says he thinks her dad is innocent. Only he betrayed her in the end with his book.

So guess who’s on Emily’s revenge list now, big time. Better yet, Treadwell still has the evidence – all the video tapes of the interviews he did with David Clarke. Complicating matters even more is that Victoria pushes Treadwell to interview Amanda (after all, Victoria thinks she is the real Amanda) to find out why Amanda has returned. This puts Amanda on the spot, as she is not, in fact, the real Amanda. But Emily and her henchman Nolan (Gabriel Mann) find some techno wizardry to get Amanda through it.

The interesting thing is, Nolan seems to be on board with getting Treadwell back – a first, since he’s been Emily’s conscience and voice of reason throughout Emily’s plan to bring down the Graysons. After all, Treadwell is purportedly an expert on David Clarke and has clearly abused his position.

Better yet, is the shocker reveal at the end of the show that I really, really want to write about, but can’t because this is a no spoiler zone. That being said, the episode is one that moves the various story lines in the series along very nicely, including the Jack (Nick Wechsler)/Amanda story line, which hit a small bump this week, and the Declan (Connon Paolo)/Charlotte (Christa B. Allen) story line, which is up against a wall. But at the same time, it doesn’t bog down the main story line with Daniel and Emily’s relationship and how that’s lining up to their engagement and Emily’s revenge against all who conspired against her father.

REVENGE is one of those shows that is all about the plotting. Even with such excellent actors as Stowe and Mann, it’s what happens that counts with this show – and things are happening. The big problem is when the plotting gets bogged down, which it has with several episodes. This one didn’t, and I’m glad.