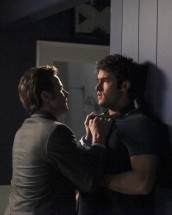 The ABC series is back to form with a crackling episode 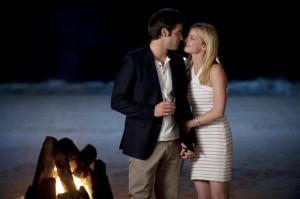 Ah, the evil Tyler (Ashley Holmes) is really going off the deep end – which we knew he was going to. Good thing Emily Thorne (Emily VanCamp) can turn any situation to her advantage in her relentless pursuit of revenge against the Graysons, who were behind getting her father convicted of a crime he did not commit. Meanwhile, it looks like the divorce between Victoria Grayson (Madeleine Stowe) and Conrad Grayson (Henry Czerny) is going to get ugly, which will play nicely into Emily’s hands.

The latest episode of REVENGE – “Duress” – starts with Tyler holding a gun at the birthday party of Daniel Grayson (Josh Bowman) – and while the writers lose points for using the flashback technique – once we move into the basic story, things get rolling quickly.

While Daniel swears allegiance to his mother, Emily starts in on setting up Daniel’s birthday party as a small, intimate clambake. Meanwhile, Nolan (Gabriel Mann) has got his tech back from Tyler’s attack on his laptop and his apology from Emily, who manages to retrieve the dolphin cam from Tyler and finds his meds.

Turns out Tyler is taking an anti-psychotic and can be violent. Admittedly, this comes as no surprise, but Nolan and Emily decide to act fast to get Tyler corralled.

What makes this episode so good is that it does advance the divorce story line, as well as the false Amanda Clark (Margarita Levieva) story line – she’s still around and it’s playing nicely into the situation with the Grayson – and yet it’s focused. It’s all about Tyler’s meltdown and how they’re going to take care of getting him out of the way. We know Tyler is not going to kill anyone that counts because that would end the series, but that doesn’t mean somebody won’t get wounded, which does raise the stakes nicely.

I have to give Ashton Holmes his props – he’s really gone to town with this character. We knew he was crazy mean, but not this crazy mean, and yet we can see that he’s been hinting at this all along. This isn’t a rage that doesn’t come from anywhere and yet the depths of it was well-hidden enough that we believe that the characters didn’t see it. A  worthy exit (at least, we think it’s an exit) for this thoroughly disagreeable character.