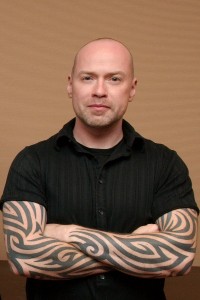 While at the 37th Annual Saturn Awards Thursday night, ASSIGNMENT X caught up with SPARTACUS creator and executive producer Steven S. DeKnight who filled us in on how filming for SPARTACUS: VENGEANCE is going in this exclusive interview.

“We’re shooting Episode 5, so we’re almost halfway done,” he reveals. “Obviously, it has a lot of the same feel, but the stories are much, much bigger. The technical challenges are huge and soul crushing to my producing partner Rob Tapert down there [in New Zealand].”

As far as the major story arcs, DeKnight says those will be bigger too.

“The arcs are gigantic,” he admits. “We’re really, really swinging for the fences this season. We’re probably chewing off more than we can swallow. That’s what we do on SPARTACUS, we always try to do more than is physically possible.”

With Liam McIntyre now taking over the role that Andy Whitfield defined in BLOOD AND  SAND, DeKnight says they didn’t approach writing the character differently, but definitely the actor brings his own special gravity to the role.

DeKnight was also thrilled by the critical and ratings success of the SPARTACUS: GODS OF THE ARENA mini-series that aired earlier this year which has solidified the SPARTACUS brand for Starz.

“What people forget about prequel, it was such a gamble,” admits DeKnight. “Nobody knew if anybody was going to show up and watch it. When it was first announced, the reaction was not positive. People didn’t want us to go backwards, but then it ended up getting more viewers than the first season. It worked very, very well. We’re very excited to get back to main story.”